Taking his career record in qualifying at Roehampton to a perfect 8-0, Luke Saville is one win away from reaching the Wimbledon main draw for a third straight year. 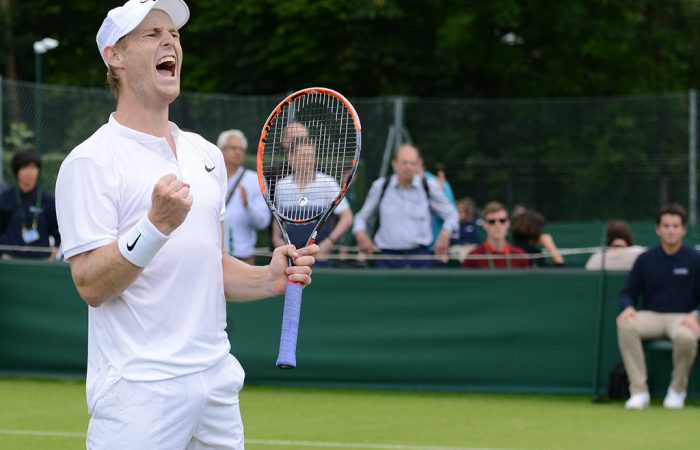 He may not be having the best season. He may not even have played a great match.

But put Luke Saville on a grass court in Wimbledon qualifying, and the Australian will get the job done.

Saville on Wednesday took his record at Roehampton to a perfect 8-0 when he overcame Bosnia’s Aldin Setkic 6-4 3-6 8-6 in two-and-a-half hours.

The win moves him through to the final of round of Wimbledon qualifying for the third straight year; he went on to reach the main draw in both 2014 and 2015.

“It’s really rewarding, but I didn’t play great today though, I didn’t hit my forehand well, I didn’t serve as well as I could have, so it was just a real battle at the end there,” he assessed.

“I really struggled to hold serve. He returned well. A fair bit of credit has got to go to him, I thought he played pretty well, and he probably should have won that. He started to think about the result a little bit.

“I hung around – obviously I’m not going to go anywhere, I’m going to keep fighting.”

After pushing ahead 2-0 in the third set, Saville lost that advantage and then twice fell behind a break, falling behind 3-4 after dishing up two consecutive double faults.

Setkic later served for the match leading 5-4, but Saville produced two forehand winners to break back.

In the final game Saville made an aggressive move, snapping a backhand volley winner and then a backhand return winner to gain two match points.

“I’ve played well here the last two years. I guess it does give me confidence that I’m 8-0 in Wimbledon qualifying … I know I play well on grass. I get a good feeling when I walk into Roehampton,” Saville said.

“Really there’s one goal this week, and that’s just to take it one match at a time, and get to that main draw.

“I’ve experienced this situation before – I’m sure I’m going to be a bit nervous (in the final round) but I’m going to go out there and give it my absolute all. That’s all I can do.”

Strong results at Challenger and Futures level in Australia earlier in the season were followed by a succession of early-round defeats, until he got onto the grass in June and reached the quarterfinals of the Surbiton Challenger.

The South Australian hopes another successful campaign at Roehampton can inject some confidence back into his game.

He faces Matthias Bachinger of Germany for a spot in the Wimbledon main draw.

“My season hasn’t been great, there’s no doubt about that. I would have liked to have definitely won more matches, but I’m doing my best out here,” he said.

“I feel like since 12 months ago I’ve added a couple of things to my game, so I feel like I’m improving, but the ranking’s not exactly showing that.

“I got a couple of niggles after I started to play well at the start of the year, had to take a few weeks off. I’m not making any excuses – I haven’t quite put it all out on the match court the first six month of this year.

“All you can really do is look forward as a tennis player, and I’m working hard and I’m hoping this week can definitely provide me with some confidence.”