The competitive fire still burns for Lleyton Hewitt, who will contest the Wimbledon men's doubles event with Jordan Thompson. 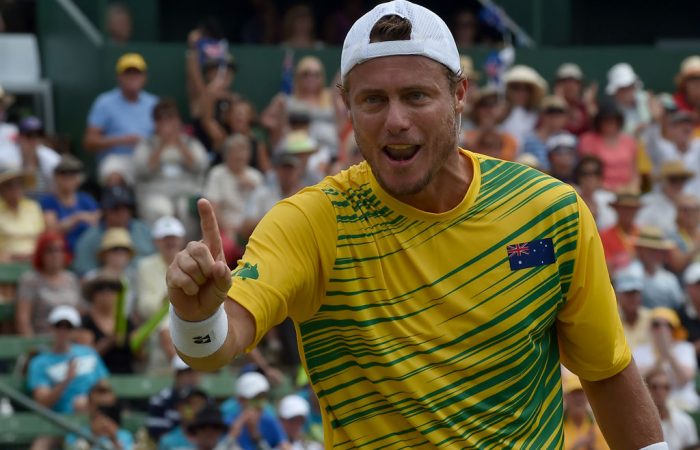 Lleyton Hewitt’s tennis farewell tour has made a belated addition – a goodbye to the Wimbledon crowd six months after retiring.

Hewitt has accepted a main draw doubles wildcard at the All England Club, where he will team up with rising Australian star Jordan Thompson.

Wimbledon holds special memories for Hewitt, who won his second Grand Slam title at the historic venue in 2002.

Hewitt was thought to have played his last match of competitive tennis in January when he retired after exiting the Australian Open with a second round loss to Spain’s David Ferrer.

But Hewitt isn’t quite ready to extinguish the flame just yet.

The 35-year-old Davis Cup captain first came out of retirement to play doubles with John Peers in Australia’s World Group showdown with the United States in Melbourne in March.

He flirted with the idea of playing one of the singles’ rubbers in that Davis Cup tie as well – but a Grand Slam return was unexpected.

In his role as Davis Cup captain, Hewitt would have been present at Wimbledon to support and mentor the male contingent which will include Nick Kyrgios, Bernard Tomic, John Millman and Jordan Thompson.

He will also be involved in a commentary capacity for the BBC.

Thompson has previously spoken of his admiration of Hewitt, who was courtside at the French Open when the 22-year-old won his first grand slam match.

“Having Lleyton Hewitt, one of my tennis heroes, on the sidelines was unbelievable,” Thompson said.