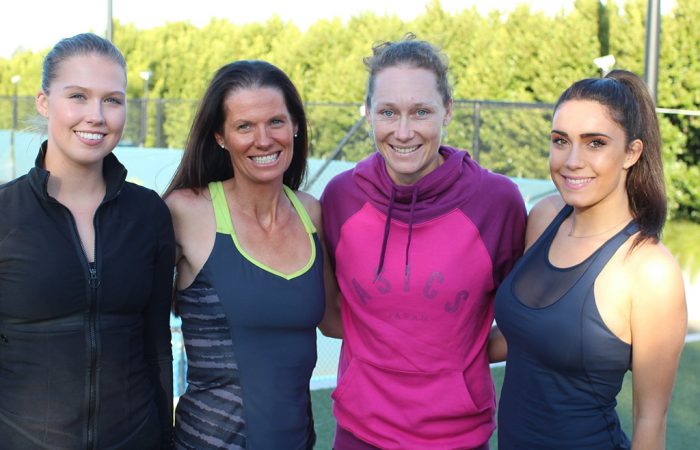 Sam Stosur took time out during a brief trip home to Australia this week to meet the first three recipients of Tennis Australia’s coaching scholarships for women.

Currently ranked world No.14 and Australia’s No.1 ranked player, the 2011 US Open champion and recent semifinalist at Roland Garros enjoyed the opportunity to encourage Maria Bailey (Berwick), Ellie Baxter (South Yarra) and Grace Primilyrlidis (Kingsbury) in their coaching careers.

“It’s obviously nice to see some more women getting involved. We are 50 per cent of the population and women like to play sport,” Stosur said.

“It was great to meet Maria, Ellie and Grace. They’re all really passionate about tennis and I’m sure they’ll be terrific coaches and mentors. Providing scholarships and getting more women into coaching is a powerful initiative and I look forward to seeing more women in coaching at all levels of the sport.”

Earlier this year Tennis Australia’s Head of Women’s Professional Tennis Nicole Pratt announced a series of scholarships for female coaches as part of Tennis Australia’s commitment to promoting women in tennis and increasing opportunity at all levels.

In an ongoing drive to increase the number and quality of female tennis coaches nationwide, eligible women can now access additional funding to pursue their Tennis Australia coaching qualifications.

Thirty-five scholarships are on offer to women undertaking coaching qualifications to develop players at all levels, from ANZ Tennis Hot Shots to elite performance pathways. There are currently 542 registered female coaches in Australia, 21 per cent of the national total.

Fifteen of these scholarships have been awarded with more to be announced later this year.

“We need more diversity in our coaching ranks and we want to make our internationally recognised coaching qualifications more accessible to women. It’s no surprise women make great coaches so this is about providing more opportunity, and from there, more flexibility.”

Pratt said the scholarship program would ensure female coaches are encouraged and assisted to achieve their ambitions.

“Women already make an enormous contribution to our tennis coaching community and this program is designed to encourage more of them to get involved and achieve their qualifications,” she said.

“Tennis relies on qualified coaches at all levels, whether it’s introducing new players to the sport through ANZ Tennis Hot Shots, helping club players develop their skills or guiding our elite players to Grand Slam success. Women are central to our sport and these scholarships are designed to recognise and reward their roles.”