Nick Kyrgios and Bernard Tomic will prepare for Wimbledon at London's Queen's Club this week, and Sam Groth hopes to join them in the main draw. 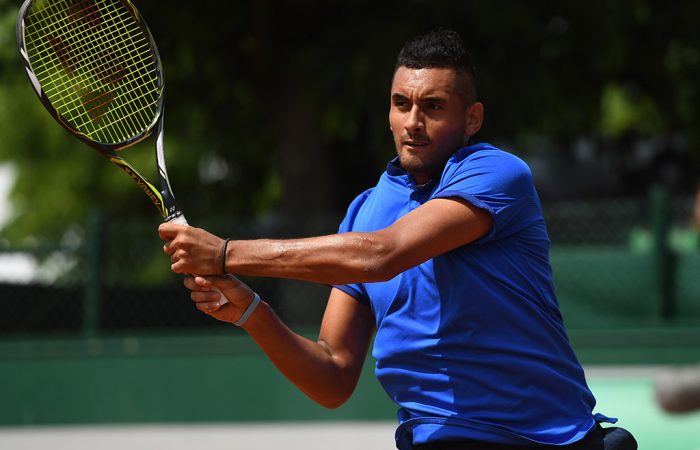 Dealt a tricky first-round Queen’s matchup, Nick Kyrgios will warm up for Wimbledon with another showdown against Canadian star Milos Raonic.

Kyrgios, tagged a Grand Slam winner-in-waiting by former Wimbledon champion Pat Cash, will open his grasscourt campaign against the world No.9 at London’s Queen’s Club this week.

Australia’s two leading men will both contest the traditional Wimbledon lead-in tournament with Kyrgios looking to build on an impressive claycourt season – which included a 9-4 record and a third round exit at the French Open – and world No.22 Bernard Tomic back on his favourite surface.

Kyrgios is sixth favourite to take out Wimbledon and secure a maiden major title, and holds a 3-2 career record over Raonic having won their past three matches – including both clashes this year.

Tomic will be delighted to return to grass after a sluggish claycourt season – though he will be encouraged by better-than-expected form and results in Paris, where he reached the second round and fought hard before being ousted on his least favourite surface.

Like Kyrgios, Tomic also plays his best tennis on grass and his best-ever Grand Slam finish came in 2011 when he reached the Wimbledon quarterfinals.

Tomic warmed up for Queen’s with a quarterfinal appearance at the Ricoh Open in the Netherlands and will be hoping for some results to go with his recent hard work.

Sam Groth is seeking to join Kyrgios and Tomic in the main draw after reaching the second round of qualifying with a 6-3 6-7(4) 7-6(1) win over countryman James Duckworth on Saturday.

Groth will next play France’s Adrian Mannarino on Sunday.

Fellow Australian John Millman was knocked out by highly-rated American teenager Frances Tiafoe in the first round of qualifying.

Meanwhile, young gun Thanasi Kokkinakis will not feature this week despite having been given a wildcard as he erred on the side of caution and pulled out of the tournament.

Kokkinakis is continuing a slow recovery on a shoulder injury and was eager to play but coaches decided it best he not rush things – a decision which has also resulted in him pulling out of Wimbledon later in the month.

“Shattered I can’t play through grass this year,” he wrote on Twitter.