Sam Stosur is tipping Garbine Muguruza as a very good chance in tomorrow's Roland Garros final after being dismissed by the Spaniard in the semifinals. 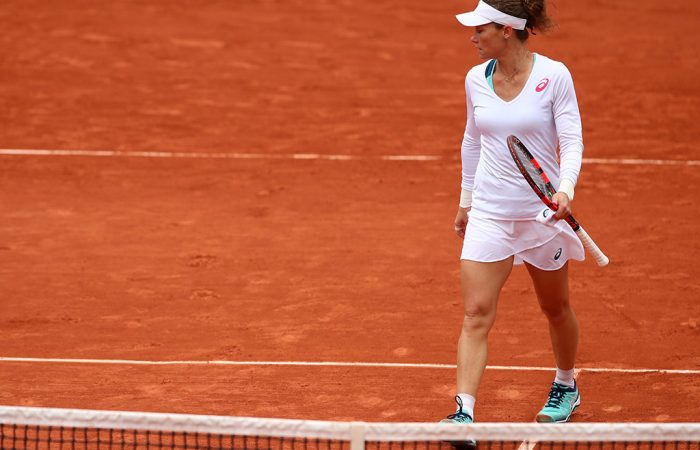 Stosur believes Williams, who she stunned to win the 2011 US Open, is ripe for the picking after flirting with a quarterfinal exit on Thursday before a straight-sets win over Kiki Bertens on Friday to reach the final.

Muguruza, who lost to Williams in the Wimbledon final last year, is one of the rising stars in the women’s game – and showed Stosur exactly why during a French Open semifinal dusting on Friday.

Muguruza unleashed her explosive groundstrokes all over Suzanne Lenglen Court as she thumped the Queenslander – who felt she was in the form of her life this week – 6-2 6-4.

It was all over inside 74 minutes and gave Stosur reason to believe an upset is brewing ahead of Saturday’s final.

“I do think she’s got a very good chance to win tomorrow. I think she’s played well the whole tournament,” Stosur said.

“I watched a little bit of Serena. I don’t feel like she’s in her best form at the moment.”

Williams has managed to reach the final despite struggling at times with an adductor injury, which Stosur believes leaves her vulnerable.

However, she’s also not foolish enough to write off an all-time great.

“Having said that, (Serena is) still in a final and you certainly wouldn’t ever count her out,” Stosur said.

“I think Garbie is playing well enough to certainly have a really good chance.”

At the age of 22 and into her second major final, Muguruza is turning heads and has many predicting she’s on the cusp of producing a breakthrough major title.

“She’s had a great couple of years since she’s got to the top of the game. She’s stayed in the top 10 that whole time,” Stosur said.

“So once you’re there it’s not easy to stay there, and I think matches like today and probably what she’s played all week with her aggressive style is why she’s there.