Fit and focused despite being the second-oldest player left in the draw, Sam Stosur is in with a chance to secure her first French Open title - according to her vanquished quarterfinal opponent. 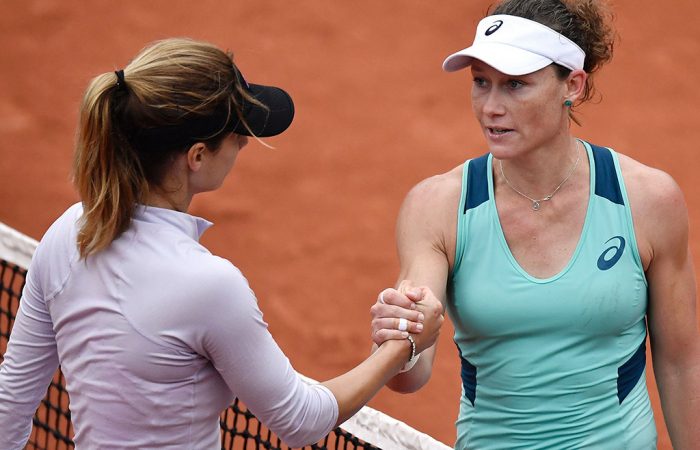 Bulgaria’s Tsvetana Pironkova has applauded the career renaissance of Sam Stosur, saying age won’t be a factor as the Australian sets her sights on a French Open triumph.

At 32, Stosur is the second oldest remaining in the women’s draw – with only the unrivalled 34-year-old Serena Williams her senior.

Williams holds the record, at 33 years and 289 days, as the oldest female major champion – something she achieved at Wimbledon last year for her 21st grand slam title.

But despite being 10 years the senior of her semifinal opponent, Spanish No.4 seed Garbine Muguruza, Stosur remains at the peak of her fitness and says she’s moving around the court as well as ever.

And having been dusted in straight sets, Pironkova gave her every chance of adding a French Open title to her 2011 US Open silverware.

“I don’t think age is a factor that much anymore. Obviously players are playing until much older age than they used to be playing.

Pironkova hailed Stosur’s fighting qualities and said the variety in her game – coupled with a fearsome forehand and near-flawless overhead smash – made her a difficult matchup for any opponent.

“Her strokes are not typical. They jump really high,” she said.

Despite her hot form and being just four sets away from potentially lifting the Coupe Suzanne Lenglen, Stosur will not let herself think about taking out the title just yet.

Her semifinal will be against world No.4 Muguruza – an extremely tough proposition – and that is as far as Stosur will let her mind wander.

“You can’t get ahead of yourself. I’m not thinking anymore about being in that position as what I was before I played my first round, to be honest.

“I know that this next match is going to be very hard.

“There are only a handful of us left now and we all want it really bad. It’s not going to be easy from this point on.”