After taking tentative steps back to the sport via ITF doubles events, Ash Barty has made an impressive return to the singles arena on grass in Eastbourne. 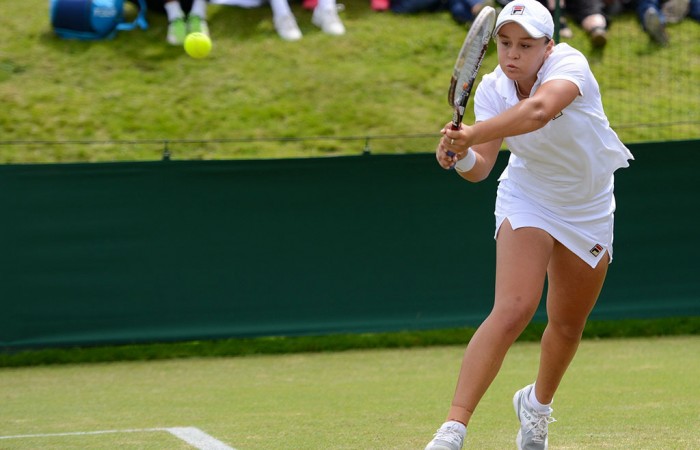 While rain again delayed the French Open campaign of Australia’s top-ranked woman, across the channel the comeback is on for her one-time Fed Cup teammate.

Sam Stosur was left frustrated by yet another Roland Garros rain delay on Monday, with her fourth-round clash against world No.6 Simona Halep stalled with the 32-year-old down 5-3 in the first set.

But the return of her heir apparant, Ashleigh Barty, at a second-tier ITF event at Eastbourne was a much brighter proposition.

On Monday, in a sure sign that her return to tennis is well and truly on track, Barty took just 77 minutes to thrash former top 30 star and current world No.140 Urszula Radwanska 6-3 6-0 in the opening round.

Her appearance in Eastbourne is her first singles outing since the 2014 US Open.

Long thought of as Australia’s most promising up-and-coming female talent, Barty walked away from the game at 18, shortly after that US Open appearance.

The junior Wimbledon champion and three-time Grand Slam doubles finalist instead chose to switch sports and play Twenty20 cricket for the Brisbane Heat in the women’s Big Bash League over summer.

But she returned to tennis in February and is beginning to make her presence felt.

At Eastbourne this week the 20-year-old swept through qualifying, winning three matches against top-300-ranked players to reach the main draw.

Barty will next face former world No.5 Daniela Hantuchova on Tuesday for a quarterfinal spot at the $50,000 event.

As a 17-year-old Barty reached a career-high world ranking of 129 in 2013 – the same year she made major doubles finals at the Australian Open, Wimbledon and the US Open and won a rubber at the Fed Cup.