Nick Kyrgios has moved through to the second round of the French Open with a straight-sets win on a soggy Sunday at Roland Garros. 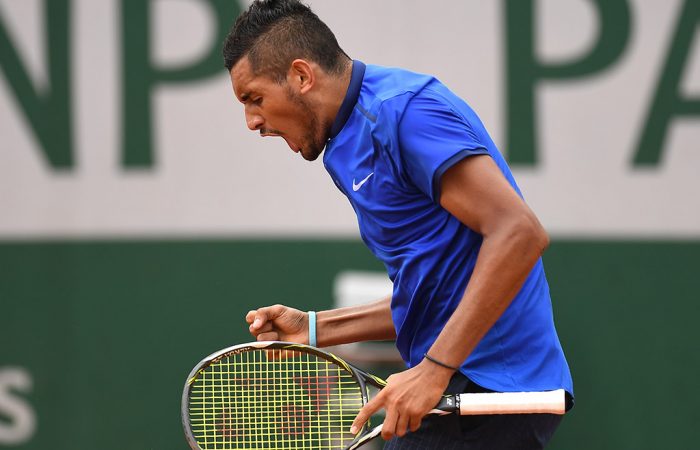 Australia’s Nick Kyrgios did his best to enliven a damp and dismal Parisian day with eye-catching play as the French Open began without some of its familiar settings on Sunday.

The volatile 17th seed mainly let his racket do the talking during an impressive 7-6(6) 7-6(6) 6-4 defeat of Italian debutant Marco Cecchinato, although he did receive a code violation in the first set.

Kyrgios will next face Igor Sijsling after the Dutch world No.123 beat Romanian qualifier Adrian Ungur 6-1 6-2 7-6(5).

Home favourite Benoit Paire, one of 16 Frenchman to start in the main draw, produced a topsy-turvy display against Moldovan qualifier Radu Albot before winning in five sets, while fifth seed Kei Nishikori was interrupted by the rain when he was leading Italy’s Simone Bolelli by two sets.

Long lines of fans formed outside Roland Garros as security was visibly beefed up in light of November’s deadly attacks in the city and once inside the historic grounds there was a feeling that things were not quite where they should be.

Three courts, numbers seven, nine and 11, which used to flank the Chatrier showcourt, have disappeared, replaced by a muddy hole in the ground – the start of a controversial re-development that will included a new stadium court by 2020.

Leafing through their programs the fans would also have noticed the name of Roger Federer absent from the men’s draw for the first time since 1998 after the Swiss 17-time Grand Slam champion withdrew injured.