Nadal ready to suffer against Groth

Most would see it as a horror draw for Sam Groth, but Rafael Nadal insists it's a tough match-up for himself as the Spanish claycourt legend takes on the Aussie in round one at Roland Garros. 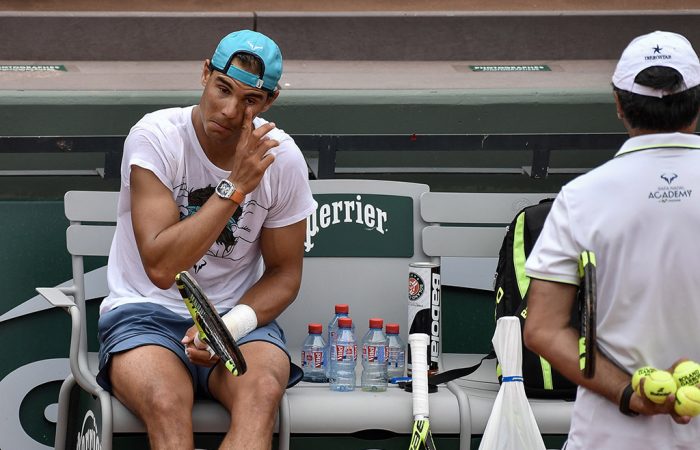 Under an injury cloud and facing the greatest claycourter of all time, Sam Groth may appear to be on a hiding to nothing at the French Open.

But it is nine-times champion Rafael Nadal who says he’s preparing to suffer in order to overcome the powerful Australian this week.

When Nadal’s name flashed up alongside Groth’s at the tournament draw on Friday, big-serving Groth was handed the toughest of assignments.

The horror draw piles on the pain for Groth, who is entering the second Grand Slam tournament of the year with a blocked nerve in his neck that has twice forced him to retire from matches in the past month and has hampered preparations.

Unquestionably, Groth will start as an enormous outsider in the first-round clash against the crowd favourite at Roland Garros, where the 14-time Grand Slam champion Nadal happily says he feels at home.

But the former world No.1 was also not thrilled with the first round match-up, insisting it presents a banana slip opportunity.

“He’s uncomfortable first round. He’s a difficult one,” Nadal explained.

“I’ve got to be ready for suffering a little bit during the match because I know it’s going to be difficult to have breaks.

“But I hope to stay focused mentally and to compete well.”

The duo have never clashed in competition before, but Nadal immediately knew what to look out for when asked about Groth’s strengths.

“He has a huge serve,” the Spanish fourth seed said.

Groth has endured a mixed 2016 to date, reaching the second round of tournaments on just two occasions – at the Australian Open in January, and more recently at the Miami Masters.

By contrast, Nadal has titles in Barcelona and Monte Carlo – modest results by his standards, but enough to give him confidence heading into their showdown.

“I am well into 2016 now, and I played a few good events in a row, so I hope to continue playing well here,” Nadal said.

“That’s all my goal: keep going the same way that I am playing, and if it’s possible to play even a little bit better and better.

“But I’m happy the way I have played since Indian Wells … I need to just keep going.”