Daria Gavrilova has continued her excellent form on European clay, ousting the in-form Simona Halep to reach the third round in Rome. 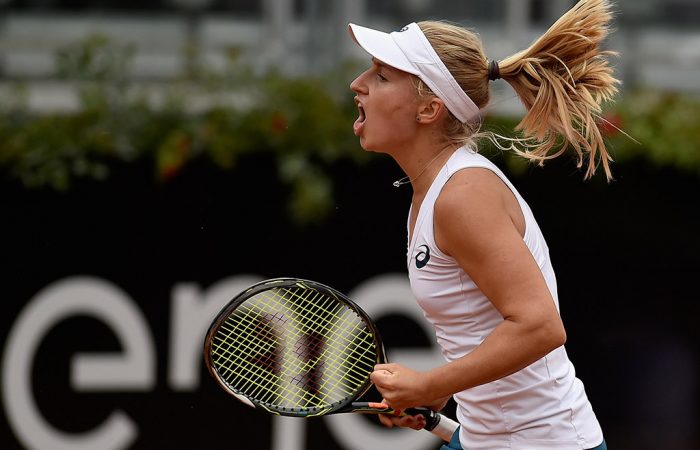 Australia’s Daria Gavrilova has chalked up one of the best wins of her career with a three-set victory over in-form Romanian world No.5 Simona Halep to reach the third round of the Internazionali BNL d’Italia in Rome.

It wasn’t such a good day for Sam Stosur who was eliminated 6-4 6-4 by world No.9 Svetlana Kuznetsova; Kuznetsova now face Gavrilova for a place in the quarterfinals.

Halep, who won the Mutua Madrid Open last week, was widely tipped to repeat the feat in Rome, went down 6-3 4-6 6-3 in a rain-affected match on Wednesday.

The 2014 French Open finalist wasn’t at her best in the opening set but hit back to win the second before the rain halted proceedings.

Gavrilova came out firing after the restart and Halep battled to hold serve in the fourth game of the decider only for the Melbourne-based 22-year-old to finally get the vital break and open up a 5-2 lead.

Serving for the match the world No.32 couldn’t finish the job as Halep broke back, but Gavrilova responded brilliantly and put the Romanian to the sword by breaking to love and clinched victory in just under two hours.

Gavrilova reached the semifinals at this event last year and this was only her second win over a top-five player after success over former world No.2 Maria Sharapova in Miami last year.

The Russian-born right-hander hit 31 winners in her impressive display as Halep, who made 33 unforced errors and struggled to cope with her opponents’ energetic style.

This victory comes on the back of last week’s wins over world No.6 Petra Kvitova and 19th-ranked Ukranian Elina Svitolina in Madrid.