Young Queenslander Lara Walker has been selected to represent Australia at the Longines Future Tennis Aces event in Paris during Roland Garros. 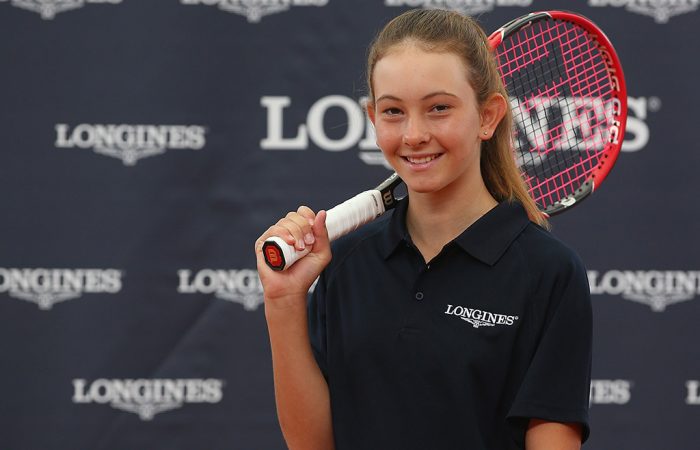 The future is looking very bright for rising star Lara Walker after being chosen to represent Australia at the Longines Future Tennis Aces tournament in Paris from 26-28 May 2016.

As a prelude to the tournament, 12-year-old Walker from Redland Bay in Queensland participated in a practice match on Wednesday with Australian tennis legend Todd Woodbridge on the purpose-built claycourt installed on Pat Rafter Arena.

Based on her recent performances and national ranking, the young Queenslander was selected to participate in the tournament by a Tennis Australia panel. She is currently the highest ranked player in her age group (born after 30 May 2003) in Australia.

Walker said she was excited to travel to Paris and compete overseas for the first time.

“To be given the opportunity to compete internationally against some of the world’s top players in my age group is very exciting,” she said.

“This is my first trip overseas and I hope to do my best on the clay. I look forward to meeting all the other athletes and show the world what I’ve got in Paris.”

Twenty-two-time Grand Slam champion Todd Woodbridge said it is a fantastic opportunity for Walker to battle it out against some of the world’s leading young female players in the 12-and-under age group.

“The opportunity for Lara to compete at the Longines Future Tennis Aces tournament will provide her with invaluable experience competing at an international level,” Woodbridge said.

“The Longines tournament draws some of the best young players from around the world and gives athletes the opportunity to experience high quality match play in a competitive environment.

“We look forward to following Lara’s progress in Paris and hopefully she can have the same success fellow Australian Destanee Aiava achieved in 2012.”

The Longines Future Tennis Aces tournament provides junior athletes from 16 different countries with the opportunity to test their ability in an international tournament.

Aged between 10 and 12 years old, this year’s competition will showcase the talent of young girls performing on the international stage for the first time.

Walker and 15 other young talented players will compete over two days in an effort to qualify for the final on Saturday 28 May. In the lead up to the tournament, Walker will take part in the Longines Academy, a training camp that offers the young participants with the opportunity to receive invaluable advice and a coaching session from Longines Academy coach, Rémi Barbarin.

The 2016 exhibition tournament will be played in the first week of the French Open in Paris.