Stosur, Kyrgios march on in Madrid

Sam Stosur and Nick Kyrgios have continued their fine form in Madrid, advancing to the semifinals and quarterfinals respectively. Tough tests await. 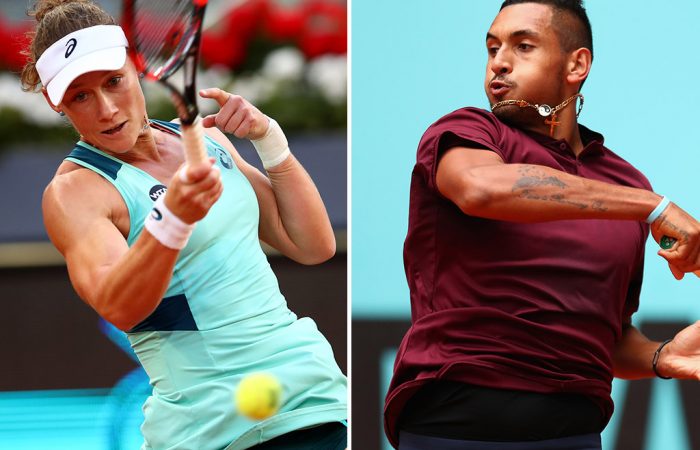 Sam Stosur has stormed into the semifinals of the Mutua Madrid Open with a clinical straight-sets win over Romanian qualifier Patricia Maria Tig.

Also advancing was Nick Kyrgios, who continued his sparkling form ahead of this month’s French Open with a hard-fought three-set win over Uruguay’s Pablo Cuevas.

Stosur smacked 22 winners en route to the 6-3 6-4 victory in one hour, 32 minutes, which sets up a clash in the last four with another Romanian – sixth seed Simona Halep.

The pair have split six career meetings, yet Halep was won the past three.

“Simona’s had a great couple of years, we’ve had some really tough matches in the past, so I’m expecting a long and tiring match,” Stosur said after closing out the day’s play on Manolo Santana court.

“I’m looking forward to it and hopefully be really ready.”

Stosur was forced to fend off three break points at 0-40 deficit serving for the match against Tig in the 10th game.

Yet she played patient tennis, probing her inexperienced opponent with heavy topspin and biting slice to eventually draw errors.

She reeled off five straight points to advance.

“I thought I played really well, I’m happy with the way that I played. She’s been in very good form – she’s a qualifier – so she’s had lots of matches. So I’m really pleased to get through that in straight sets,” Stosur said.

Stosur has now won nine of her 13 claycourt matches in 2016.

Earlier on Thursday, Kyrgios slammed down 14 aces in a high quality encounter against the claycourt specialist Cuevas, ranked 27th, to prevail 7-6(5) 4-6 6-3.

Kyrgios will face world No.6 Kei Nishikori in the quarterfinals on Friday after the Japanese star beat Richard Gasquet 6-4 7-5.

Novak Djokovic, Rafael Nadal and Andy Murray also made their way into the last eight, each with straight-set wins.

The top-ranked Djokovic beat Roberto Bautista Agut 6-2 6-1 for his 30th win of the season, the most on tour. Defending champion Murray defeated Gilles Simon 6-4 6-2 while Nadal beat Sam Querrey 6-4 6-2.

In one of the first matches of the day, Daria Gavrilova’s exciting Madrid Open campaign came to a disappointing end.

The world No.39 was well-fancied to progress to the semifinals following Wednesday’s stunning win over defending champion and world No.6 Petra Kvitova, yet went down to the teenaged Chirico 7-6(1) 6-2.

The 130th-ranked Chirico looked the fresher of the two players – aided by her third round walkover after Victoria Azarenka withdrew due to a back injury – and hit 27 winners against the under-par Gavrilova.

Her victory saw here become the first American teenager to reach the semifinals of a top clay-court event since Ashley Harkleroad in Charleston, South Carolina, in 2003.

She will next face 38th-ranked Dominika Cibulkova of Slovakia.