Two Canberra primary schools have had their six Tennis Hot Shots courts - courtesy of ANZ - unveiled by Todd Woodbridge in an official opening ceremony on Wednesday. 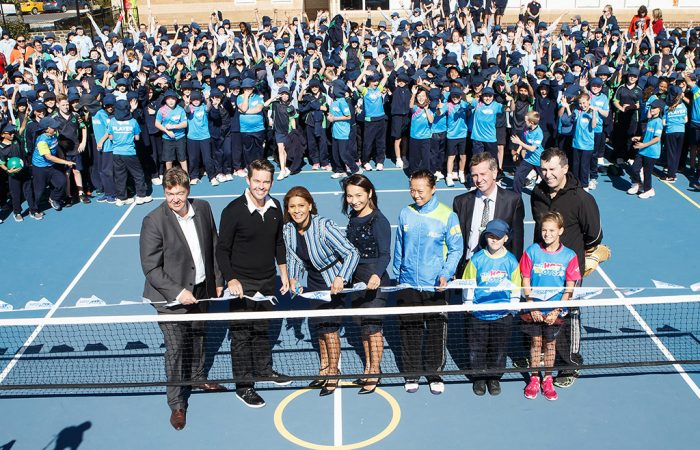 As part of a Tennis Cares initiative at Australian Open 2015, ANZ raised $50,000 to help local community programs in the Asia-Pacific region.

The money was used towards upgrading the two schools’ existing facilities and installing modified courts.

Todd Woodbridge said the new mini courts would give students the opportunity to play tennis on a regular basis, keeping them fit and active.

“The students of Good Shepherd and Holy Spirit will have lots of fun playing ANZ Tennis Hot Shots on these brand new state-of-the-art mini courts during their curriculum, at lunch time and before and after school,” Woodbridge said.

“These smaller courts, complemented by smaller racquets and low compression tennis balls, give kids the opportunity to learn the fundamental skills and enjoy the sport from a young age.

“Providing the right-sized courts in schools and communities is the best way to encourage kids to pick up a racquet and have a go.”

Said Tennis ACT CEO Ross Triffitt: “This is a great example of an important community project and illustrates how tennis is having a positive impact in the ACT.

“These new courts for both schools will provide the opportunity for more children to embrace tennis during school hours.”

Added ANZ Head of Marketing Australia Carolyn Bendall: “Through our association with ANZ Tennis Hot Shots and our sponsorship of the Australian Open, it is great to see how our commitment to support the growth of tennis is playing out in local communities.”

Principal of Good Shepherd Primary School Graham Pollard added: “The courts unsurprisingly are already being well used by the children of Good Shepherd both during the day at clinics and after school for lessons.”

More than 77,000 school students across 1,500 schools participate in the program as part of their health and physical education curriculum.