Wheelchair tennis legend David Hall has been honoured with yet another accolade, receiving the ITF Brad Parks Award in recognition of his significant international contribution to the sport. 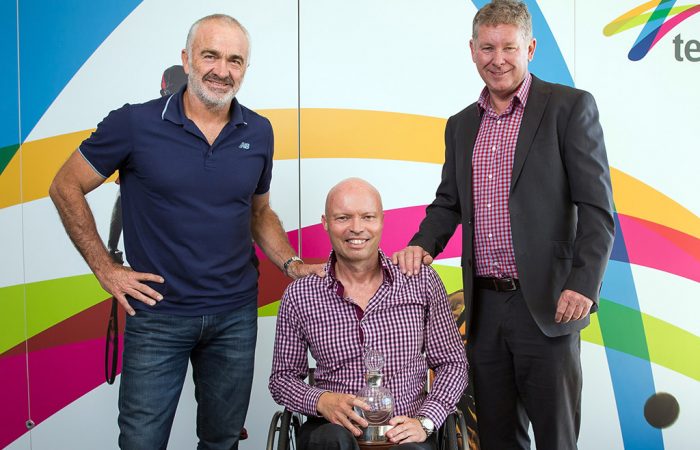 The award is presented each year to an individual or organisation that has made a significant contribution to wheelchair tennis at an international level.

Hall was presented with the award in a ceremony at Sydney Olympic Park Tennis Centre on Thursdsay.

“Now that I’ve been retired 10 years, it’s a good time to look back and see what wheelchair tennis has done for me. I feel like I can’t give back enough to wheelchair tennis because I know it’s given me so much over the years,” Hall said.

“I think this award for me is very unique because I’ve been friends with Brad. The first time I meet Brad was 1990 at the US Open and we call him the ‘godfather of wheelchair tennis’ as he is the guy that started the sport, promoted the sport for all those years, and in a lot of ways he sacrificed his playing career to do that and promote wheelchair tennis.

“For me to be awarded the ITF Brad Parks Award means a lot because Brad did such great things for wheelchair tennis. Thank you everyone for being here and thanks to Tennis NSW, Tennis Australia and the ITF.”

The award is the latest in a long list of honours for Hall, a former world No.1, Paralympic gold medallist and six-time ITF Wheelchair Tennis World Champion.

Since retiring in 2006, the New South Welshman has focused on promoting the sport of wheelchair tennis; in 2010 he was appointed an ITF Wheelchair Tennis Ambassador.

He has worked with young wheelchair players in both New South Wales and around Australia, regularly writes about the sport and in 2013 worked with long-time coach Rich Berman to produce an instructional video entitled Let’s Roll – Learning Wheelchair Tennis with the Pros, intended as a resource for new players to the sport.

“David has not only been an exceptional athlete but has also been a true ambassador of our sport, teaching youngsters and writing about wheelchair tennis. We would like to congratulate David on this wonderful achievement and we wish him the very best for the future.”