Stosur and Taylor to split 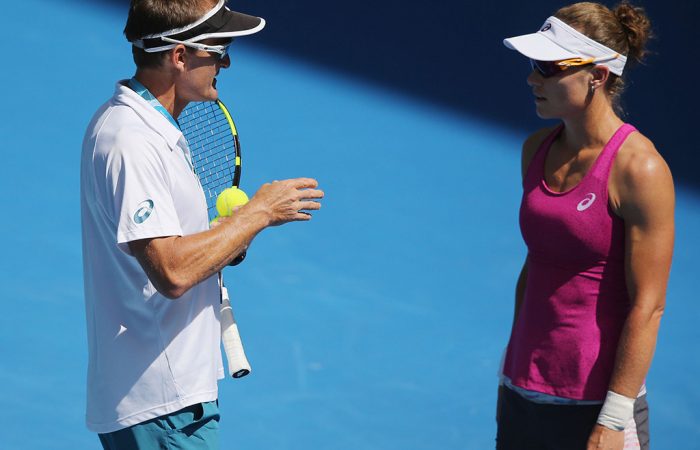 Sam Stosur is on the hunt for a new coach after agreeing to end her long and successful partnership with David Taylor following next month’s French Open.

Taylor, who has a young family and lives in Europe for much of the year, says logistically it was becoming more and more difficult to continue working with the mostly US-based former Grand Slam champion.

The pair worked together for a total of eight years, with Taylor transforming Stosur from a multiple Grand Slam doubles winner to US Open singles champion in 2011 when she famously upset Serena Williams in the final.

“Dave didn’t want to travel as much, so in order for me to not be left in the lurch, we agreed that we could continue through to Roland Garros,” Stosur revealed.

“It’s not like anything went wrong – it’s just under circumstance that we’ve come to that arrangement. I guess for me it’s good that I can continue and hopefully find somebody in the next couple of months that then I can continue on (with) past the French Open.

“I think for anybody, family comes first, and I absolutely understand that and would never want to take somebody away from their family for that reason. So whoever I work with (next), I want them to really want to do it.”

A former mentor of world No.1s Martina Hingis and Ana Ivanovic, Taylor also guided Alicia Molik to the top 10 before linking with Stosur after the Queenslander’s brush with debilitating Lyme’s Disease in 2007.

In her first major singles breakthrough, Stosur reached the French Open semifinals in 2009 and then the final the following year before reigning in New York and soaring to a career-best ranking of No.4 in the world.

Stosur split with Taylor on the eve of Wimbledon in 2013 but, after stints with Simon Rea and Miles Maclagan, reunited with Taylor with instant success before last year’s French Open.

She won a title in Strasbourg in their second tournament back together, then another in Bad Gastein to regain her place in the top 25, having earlier wrestled with retirement.

“Especially when we first started together, he kind of helped me put my game together,” Stosur said of Taylor, who also spent a stint as Australia’s Fed Cup captain.

“I could always hit a kick serve and had a big forehand and all that, but really knowing how to put it all together and where all that fits into a proper game style is what he really helped me with, especially in those early years together.

“As time’s gone on, obviously that, plus lots of other things – we’ve had lots of conversations, not just about tennis, but about personal things, about everything, that might affect your game and performance throughout any given time. We certainly covered a lot of topics over the years (laughter) and probably re-hashed a lot of things over and over again, but I think there’s no quick fix and as a coach you’ve got to be willing to put in that time to go through some hard times to get the good results.

“I think over the span of what we’ve had, we’ve certainly been able to do that, and any time it has been a bit of a rough trot results-wise, I’ve been able to bounce back and he’s been good at trying to find some answers to be able to do that as well.”

Taylor insists Stosur’s two Fed Cup losses in Brisbane over the weekend had nothing to do with their decision to soon part ways, saying they made the call in January.

He gave a glowing assessment of the 32-year-old Queenslander.

“I absolutely loved all the hard work with Sam and she thoroughly deserves everything that she’s achieved so far in her career,” Taylor told AAP on Monday.

“It’s been a very rewarding job to be given the opportunity to coach a player who possessed so much raw ability but, till that point, had been frustrated at not being able to put her game together.

“It’s unusual for a player in their mid-20s who had not been near the top of the game to realise all the improvements necessary to become a regular top-10 player and beat the greatest player of all time in a Grand Slam final.

Taylor added that the split was very amicable and that he was working with Stosur to find a suitable replacement, a process that was still ongoing.

“I know Sam has still got some great tennis left inside her and she continues to work harder than anyone,” he said.