Casey Dellacqua is confident should this weekend's Fed Cup tie come down to a deciding doubles rubber. 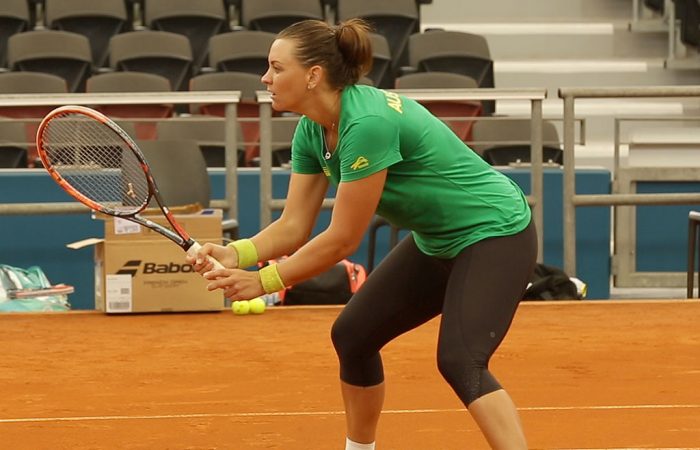 Casey Dellacqua says Sam Stosur and her can take care of business for Australia should this weekend’s Fed Cup tie against the United States come down to a deciding doubles rubber.

Mattek-Sands and Vandeweghe, who teamed up for the first time in America’s 4-0 Fed Cup World Group II victory over Poland in February, won the women’s doubles title at last month’s WTA event in Indian Wells.

“Obviously, they’re a quality team, they’ve played one tournament and won a big event so – and obviously, Bethanie’s credentials on a doubles court, we all know what they are,” said Dellacqua, who is yet to return to singles play after missing the whole Australian summer due to concussion.

“But that’s not to say both myself and Sam, who’s been No.1 in the world of doubles before … I don’t care what you say – when you go No.1 in world doubles, you’re a pretty good doubles player too.

“I think we can take confidence in the fact that, in Slovakia just recently, we won the live deciding rubber. We’ve also been playing together and played some really tough matches recently.”

Stosur and Russian-born Daria Gavrilova will play in Australia’s singles rubbers but US captain Mary Joe Fernandez is keeping her cards close to her chest ahead of Friday’s draw.

The other members of the American team are Christina McHale, who will almost certainly be kept as back-up, and world No.25 Madison Keys.

Keys has never beaten Stosur while Vandeweghe has won her past three against the 2011 US Open champion, although neither has faced Gavrilova before.

Fernandez said she wouldn’t decide who would play in what until Friday morning.

The winning team will re-enter the eight-nation World Group I for 2017, with the losing nation to drop down to World Group II next year.