Tennis Australia and Fitbit have joined forced to launch Fitbit Cardio Tennis - and it was rolled out at the National Tennis Centre on Tuesday. 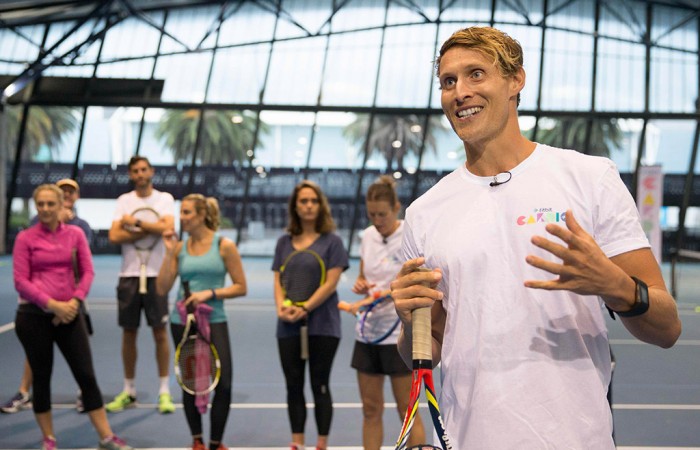 As part of the Fitbit Cardio Tennis program, participants will be encouraged to use fitness trackers like those from Fitbit to track stats such as steps, caloric burn and heart rate.

Fitbit Cardio Tennis workouts are designed to help participants improve their hand-eye coordination, tennis skills and fitness levels. The sessions include a warm up, cardio segments featuring drill-based and play-based tennis activities, and a cool down.

Thousands of Australians regularly participate in the program at more than 1,000 clubs around the country.

“This partnership is a fantastic opportunity to grow participation in tennis. A Fitbit Cardio Tennis workout is a great way to introduce new players to the sport or to encourage lapsed players back on court for a fun fitness session,” Woodbridge said.

As part of the partnership Fitbit Cardio Tennis coaches will wear Fitbit Charge HR™ and Fitbit Surge™ devices and will show participants how they can track their workouts, maximise their training and intensity with heart rate tracking, as well as monitor their progress with the devices and the Fitbit® app.

With SmartTrack™ automatic exercise recognition on both activity trackers, participants can effortlessly track their tennis games including duration, calories burned and heart rate stats, and view the information in the Fitbit app.

Whether their objective is to burn more calories, workout in a specific heart rate zone or simply participate in a fun workout and get credit for it, the coaches will provide guidance, tennis tips and encouragement to help participants reach their goals.

”Fitbit is helping Australians get more out of their tennis training by providing a positive, fun experience that will get their hearts pumping,” Hines said.

“We are excited to see tennis players at all levels, along with those keen to try out tennis, come together to challenge themselves and improve their game and their overall cardio health.

“Using a Fitbit device as part of the program, participants can track the impact this exercise had on their overall day and monitor their development over time, helping them make informed decisions to meet their health and fitness objectives.”

Tennis Australia product manager Patrick McInerney was thrilled with the success of the launch and is looking forward to encouraging more Australians to get involved in the program.

“Fitbit Cardio Tennis is a fun and social way to improve your fitness – the best part is you don’t even have to be a tennis player,” he said.

“It was a really good morning,” Bradtke said. “I normally am taking classes, so it was nice to participate in one.”

As a Fitbit Cardio Tennis coach, Bradtke has seen firsthand how the program boosts fitness and confidence.

“A lot of people say they don’t like running but then they try this and realise they don’t mind going out and hitting a few balls,” she said. “It’s a great way of getting people involved in fitness and participants find the time goes really quick.

“Sometimes the perception is you have to be a great tennis player, but you don’t. If you keep going, you actually get better hand-eye coordination. I’m finding that it is helping people get better at tennis, which is great.”

For more information and to sign up for Fitbit Cardio Tennis, visit cardiotennis.com.au. For information on Fitbit visit fitbit.com.