Nick Kyrgios' stunning run at the Miami Open has come to an end at the hands of Japanese No.6 seed Kei Nishikori, who won their semifinal in straight sets. 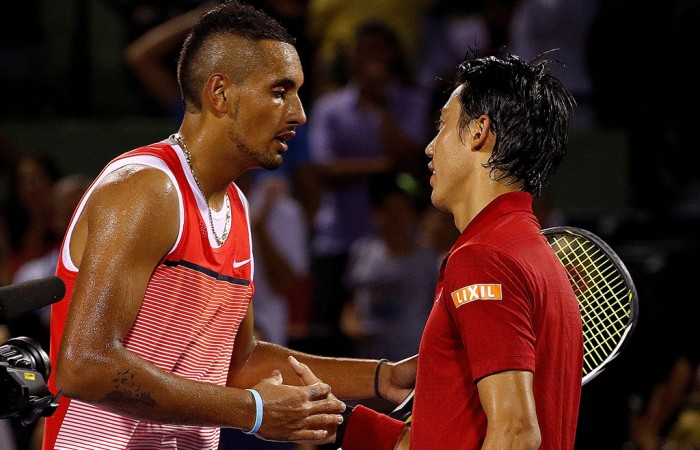 Nick Kyrgios’s run at the Miami Open is over following a straight-sets semifinal loss to Japanese star Kei Nishikori.

Sixth-seeded Nishikori earned a finals shot at world No.1 Novak Djokovic with a 6-3 7-5 victory over the rising Australian.

At 20 years and 11 months, Kyrgios will have to settle for his new status as the youngest player in the world’s top 20 following his march to the first Masters 1000 semifinal of his career.

Djokovic earlier overcame a strong challenge from Belgium’s David Goffin to reach the final with a 7-6(5) 6-4 victory as he continues his pursuit of a fifth title in six years in Key Biscayne.

The Serbian top seed shrugged off a slow start before hitting his stride in brutally hot conditions and sealed the win with a powerful first serve that forced a wayward Goffin return to end an encounter that lasted just over two hours.

The Australian Open champion improved his stellar record for the year to 27-1 and will bid to match Andre Agassi’s record of six titles at the event and earn a record 28th ATP World Tour Masters 1000 crown.