Aaron Addison has recorded the best ITF Futures result of his career after upsetting No.2 seed Alex Bolt at the Mornington Peninsula Tennis International #1. 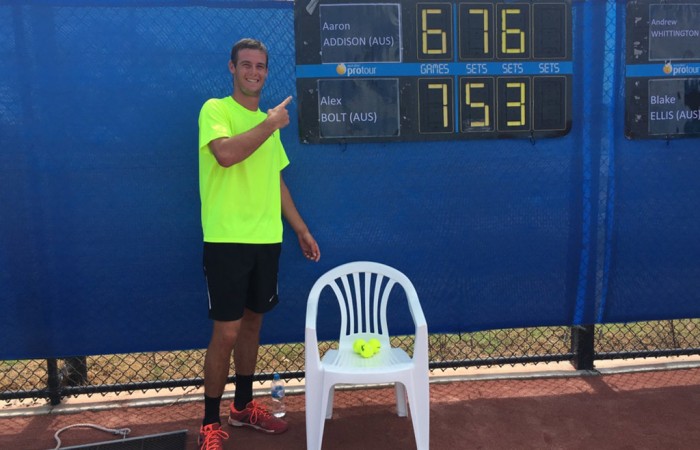 Aaron Addison has reached the quarterfinals of the $25,000 Mornington Peninsula Tennis International #1 after ousting second seed Alex Bolt on Thursday.

The 20-year-old from Melbourne recovered after losing the first set in a tiebreaker to claim the match 6-7(3) 7-5 6-3, equalling his best ever performance at an ITF Futures event.

“It’s probably my biggest win so far,” said the self-proclaimed aggressive baseliner. “I played very well. I came out and backed myself to hit a few shots I probably normally wouldn’t go for and it paid off.”

Addison, currently sitting at world No.1323, has been notable in the Pro Tour this year, performing consistently well against higher-ranked players.

“Over the last twelve months I’ve pushed the seeded guys into tough positions, but I haven’t quite managed to get over the line,” he said. “Today I really felt like I’d been in this situation before and could continue to play at the same level I did at the start of the match.

“It was good to finally get one.”

Addison now faces fellow Victorian Andrew Whittington in a bid to reach his first Pro Tour semifinal, after the No.5 seed accounted for wildcard Blake Ellis in straight sets 6-4 6-4.