Azarenka too strong for Stosur

She extended the match to three sets, yet Sam Stosur couldn't stop a surging Victoria Azarenka from advancing to the quarterfinals at Indian Wells. 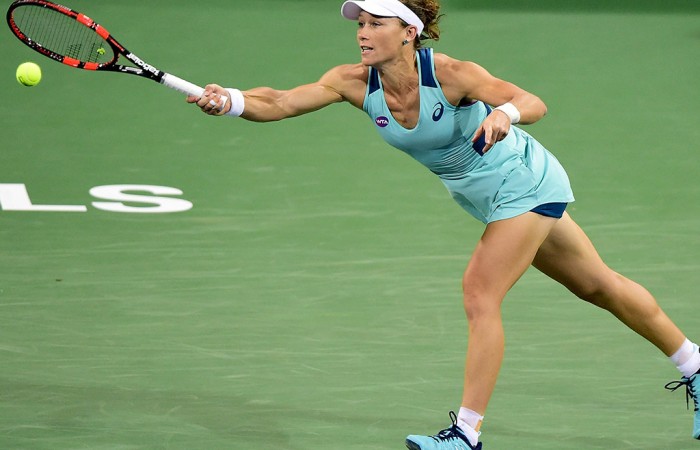 Sam Stosur fought valiantly but ultimately went down to 13th seed Victoria Azarenka in the fourth round of the BNP Paribas Open on Tuesday.

Azarenka won her ninth match in 10 meetings with the Australian, completing a 6-1 4-6 6-1 victory in a touch under two hours.

“Third set was not a great start. But she’s always right there,” Stosur said of Azarenka.

“Even thought (I lost it) 6-1 I was still happy with the way I was playing for the most part. Obviously it’s disappointing to lose but overall I thought I played a good match.

“She’s a quality opponent, so she’s hard to play.”

Stosur was overwhelmed in the opening set; she was broken in the third game by the rock-solid Belarusian, part of a winning run of five straight games for Azarenka that saw her take a one-set lead.

Azarenka was having particular success with the tactic of going hard crosscourt, forcing Stosur to err frequently on her running forehand.

Yet in the second set, a slight dip in Azarenka’s level, combined with Stosur lifting hers, saw the match take on a different tone.

Stosur, the No.26 seed, bookended the opening game with forehand winners and broke Azarenka to love.

She extended her lead to 3-1 after playing an athletic backhand volley winner followed by a whipping inside-out forehand winner.

The hot shots continued to fly off the Stosur racquet – in the sixth game, a highlight reel-worthy running forehand winner was followed by another forehand winner and a 4-2 lead.

Serving for the set with a 5-4 lead, Stosur required three sets points, but converted the third with a delightful backhand lob winner to send the match into a third.

The second-set setback seemed to snap Azarenka into action.

Playing with far more intensity and focus, she raced to a 3-0 lead in the third, vocally urging herself on.

She almost made it 4-0 when she moved ahead 15-40, only for Stosur to haul herself out of trouble and get on the board with a gritty hold.

Yet it was the last game she would win.

Azarenka, a former world No.1 and two-time Australian Open champion, powered through the final three games and sealed victory on her second match point.

She’ll next face Magdalena Rybarikova, who advanced past an injured Roberta Vinci.

Next up for Stosur is the Miami Open.

“Each match I’ve got that little bit better. I was really happy with the way I played yesterday (against Christina McHale) as well,” Stosur said.

“I’ve had lots of time on court – three three-setters. So that’s only gonna put me in a good place hopefully for Miami.

“I can get over there and actually head home (to Tampa) for a couple of days first and get some practice in and hopefully have another good tournament.”