Stosur fights back to reach fourth round

Having fallen at the third-round hurdle the past two years, Sam Stosur produced another gritty comeback to beat Christina McHale and seal at last 16 berth at Indian Wells. 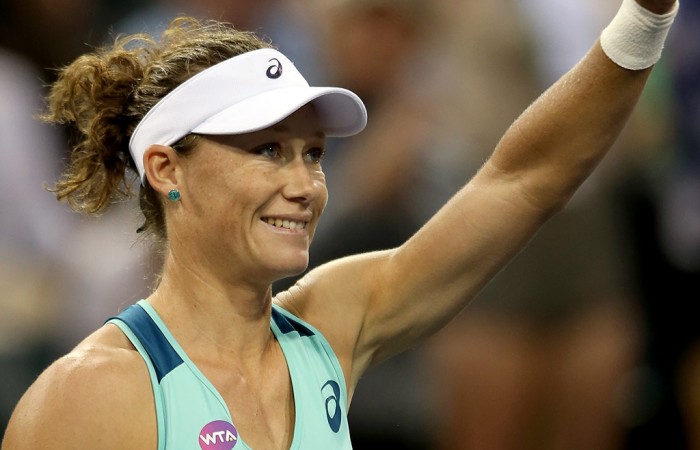 Sam Stosur has produced another impressive comeback to seal her spot in the last 16 at the BNP Paribas Open at Indian Wells.

The Australian trailed Christina McHale 0-3 in the final set before rediscovering her forehand to record a 6-4 2-6 6-4 victory.

In the previous round, Stosur saved a match point to beat Yanina Wickmayer.

She faces a fourth-round clash with 13th seed Victoria Azarenka, who takes on China’s Zhang Shuai later on Monday night in California.

Stosur was forced overcome scratchy play on a windy night on Stadium 2; she committed 54 unforced errors and hit 11 double faults throughout the two-hour, nine-minute match.

Stosur’s error-strewn play was countered brilliantly by the tigerish American, who made every ball and came into the match with confidence having beaten No.4 seed Garbine Muguruza on the same court two days prior.

“She definitely picked up her game. But I felt like I was still hitting well and doing the right things but I just had to do it a bit better and play a bit more aggressive,” Stosur said. “And after 3-0 that’s what I was able to do.

“I broke and then held serve and thought, ‘I’m back in this.’ You have to keep doing the right things to turn a match around.”

Perhaps Stosur’s 3-0 career head-to-head record over McHale lingered in the back of both players’ minds.

In the fourth game of the final set, Stosur ripped several return winners to get on the board, and buoyed by her rising level of play, won four games in a row to re-establish her ascendancy.

In the final game, another pair of forehand winners put McHale on the back foot, and a couple of points later, she converted on her first match point with her 36th winner.

“You have to play very well to have to play Azarenka. She gives you nothing. I have to do something different or do it a hell of a lot better,” Stosur said of her potential upcoming match-up.

“I love the conditions [here], the balls, the way that they react to the courts. The air is dry, so when I’m swinging freely, it works for me.”