Sam Stosur has moved through to the third round of the BNP Paribas Open at Indian Wells after an epic victory over Belgium's Yanina Wickmayer. 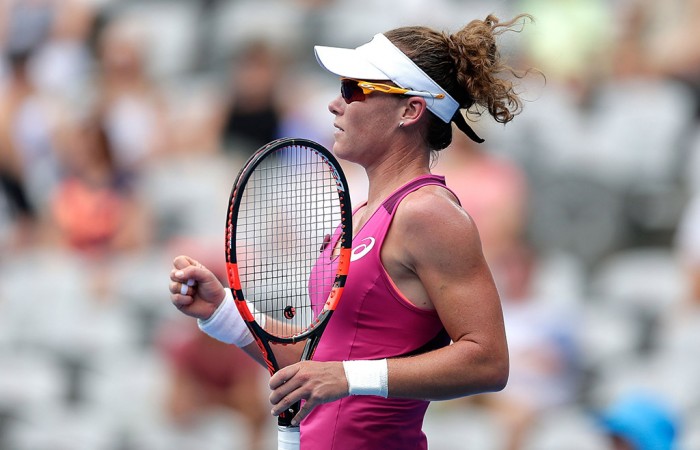 Sam Stosur has recovered from a set down and a match point in the third set to scrape out victory against Yanina Wickmayer at the BNP Paribas Open.

Stosur served 15 aces in a 2-6 6-4 7-6(6) victory in two hours and nine minutes, setting up a third-round meeting against American Christina McHale.

Stosur came into the match against Wickmayer having lost her last encounter with the Belgian, at Wimbledon in 2014.

And Wickmayer began the stronger of the pair, breaking serve in the fifth game and again in the seventh to pocket the opening set.

Games then went on serve until Stosur broke on a Wickmayer double fault in the 10th game, handing her the second set as Wickmayer flung her racquet in disgust.

In an epic 10th game of the third set, Stosur held three match points, only for Wickmayer to survive and level the third at 5-5.

In the ensuing tiebreak, Stosur saw a 3-1 lead slip and then stared down a match point when serving at 5-6.

Yet the Australian hung tough in a searching rally to save it and then aced her way to a fourth match point. She converted when her heavy forehands eventually wore Wickmayer down.