John Isner sealed a 3-1 Davis Cup victory for the United States on Sunday at Kooyong after an impressive four-set victory over Bernard Tomic. 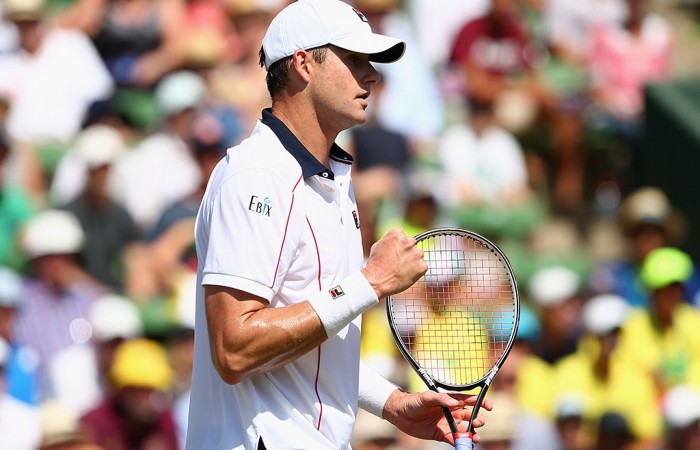 A magnificent serving performance from John Isner has helped the United States seal an unassailable 3-1 lead over Australia in the Davis Cup World Group first round tie at Kooyong.

Isner struck 49 aces during the 6-4 6-4 5-7 7-6(4) victory over Bernard Tomic, sending the US through to the competition quarterfinals for the first time in three years.

There they will face the winner of the tie between Belgium and Croatia.

“It’s breathtaking to watch (Isner) serve the way he did. Bernie is one of the great return players in tennis … for John to serve the amount of aces he did today and serve the quality high percentage that he did all day long in a match that he was obviously feeling the pressure – it’s Davis Cup last day, you’re going to feel it – he stepped up big for us.

“He’s done it for us in Davis Cup before and he did it again today.”

Isner’s serve reached speeds of up to 253km/h – a tour-level record – and he landed more than three quarters of his first serves. And The world No.11 was simply untouchable on serve throughout the first two sets against a listless Tomic.

The American was visibly pumped up in the first set, winning six of six points at the net – one of which helped him break serve in the fifth game – and holding serve to love in four of his five service games. In the second, he broke Tomic in the seventh game, using aggressive play to pin the Aussie well behind the baseline.

Despite requiring a medical timeout late in the second set to get his wrist taped, the 23-year-old found some more energy and intensity in the third.

Isner continued to serve at an incredibly high level throughout, but in a thrilling 12th game, Tomic suddenly started to get a better read on it, and thus get into some rallies.

With the crowd sensing a momentum swing, the tension and atmosphere inside Centre Court rose, and Tomic fed off it. He arrived at the first of four set points, which Isner respectively erased with a backhand winner, feathery dropshot and two aces.

Isner would arrive at two game points of his own to send the set to a tiebreak, but Tomic would not be discouraged. The Queenslander saved both of those and scores his fifth set point, which he converted when Isner erred into net. Kooyong erupted.

The fourth set settled into a rhythm of routine service holds, and it progressed rapidly to a tiebreak.

Tomic looked to have the momentum when he played a running forehand winner to score a mini-break and a 2-0 lead. But a monstrous forehand winner by Isner erased that advantage.

From 2-3 down, Isner fired two huge winning serves, benefitted from a Tomic error to gain the mini-break and a 5-4 lead, and belted another two big serves – the final one an ace – to complete victory in two hours and 15 minutes.

“The first two sets went very well for myself and our team,” Isner said, “but I knew that with Davis Cup, the crowd on his side, I knew he was gonna make a push, which he did in the third set. He played a great game to break me.

“He might have had the momentum but at the same time I’m still serving very well and holding serve. That’s what I did. I wasn’t close on his serve at all in the first set but I served extremely well myself, and was able to close it out.”

Tomic said his wrist was bothersome throughout the match, but that he was willing to play through any level of pain to represent his country.

“It was a tough match. I knew it was going to be difficult. I was trying as much as I could. Gave everything out there,” he said.

“I gave myself a chance and I was close to coming back to have a chance of winning.

“It was tough for me, not just having to deal with John and playing one of the toughest players in the game with his serve, but dealing with my problems, which was not so easy as well.”