Bryans beat Aussies in a thriller

The United States lead Australia 2-1 in the Davis Cup tie at Kooyong after Bob and Mike Bryan overcame Lleyton Hewitt and John Peers in a five-set thriller. 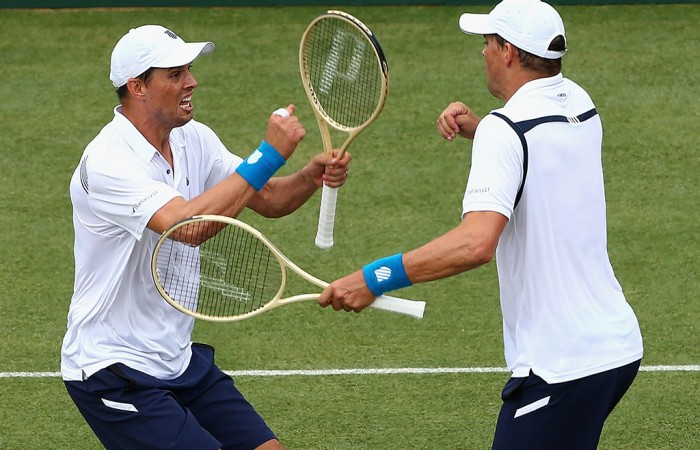 Bob and Mike Bryan combined to beat Australia’s Lleyton Hewitt and John Peers in a thrilling 6-3 6-3 4-6 4-6 6-3 doubles rubber at Kooyong on Saturday.

The American twins’ five-set victory puts the United States 2-1 up in the World Group first round tie.

Hewitt subbed in on Saturday morning for Sam Groth, and proved the game-changer in the third and fourth sets – his laser-like returns were lethal in the face of stellar serving from the Bryans, and Kooyong crackled with atmosphere as the Aussies sent the match into a fifth.

But the Bryans, arguably the greatest doubles team in the sport’s history, wrested back control of the match.

They broke serve in the second game of the fifth and built a 3-0 lead; the left-handed Bob confidently served out the match to seal the win in exactly two-and-a-half hours.

“It was only one service game, the second game, and they held comfortably in the first game which was important for them, after we really had the momentum really going for us,” Hewitt reflected.

Added US captain Jim Courier: “The level was incredible on both sides of the net. Grasscourt doubles can sometimes be a little bit messy because it’s so quick, tough to return, but man, the level from first ball was extremely high.

“Obviously it got very complicated (for us) there after the second set; those guys lifted, Lleyton in particular lifted his returns. Fortunately Bob and Mike did the same in the the fifth set and really put a stamp on it early, which was big, and just held it out.”

Earlier, the Bryans had been the dominant team.

In just one hour they had raced to a two-sets-to-love lead, breaking serve in the fourth game of the first set and the seventh game of the second, the latter break secured with a potent volley that split the Aussies down the middle.

The momentum of the match completely changed in the seventh game of the third. Hewitt, with devastating accuracy on the return, helped Australia build a 0-40 lead. Although the hosts missed all three of those opportunities, Hewitt kept creating break point chances with winning plays.

On Australia’s fifth break point, Peers – playing in his first ever Davis Cup tie for Australia – finally converted when he slotted a winner into the open court.

Three games later, Peers confidently served out the set, sending a wrong-footing volley into the tramlines to extend the match.

“It was an amazing experience,” Peers said. “It was an honour playing with (Lleyton) to share the court and see how he handles (the occasion). We sort of fed off each other today and it was an incredible experience with him.”

The atmosphere hit its peak in the third game of the fourth. With Hewitt increasingly pumped up and Mike Bryan foot-faulting several times, the Aussies scored another break to assume command of the set. They nearly broke serve a second time when they lead 0-40 in the fifth game, but Bob Bryan served the Americans out of trouble.

The Aussie duo maintained their advantage and pocketed the fourth set, but they couldn’t continue their momentum.

They fought valiantly – Hewitt at one stage even threw himself onto the court lunging for a backhand – yet the Bryans silenced the crowd and steamed through the fifth in just 26 minutes.

“Great atmosphere. Obviously Lleyton being on the court just notched it up a level. When they won the fourth, it was pretty darn loud,” Bob said.

“I just thought we did a good job of regrouping and we even went to a new level that we hadn’t found in a year.

“I gotta credit Mike for stepping up in the fifth; he hit a couple of great returns to get that early break which was everything. And we held on tight.”