Hewitt to come out of retirement 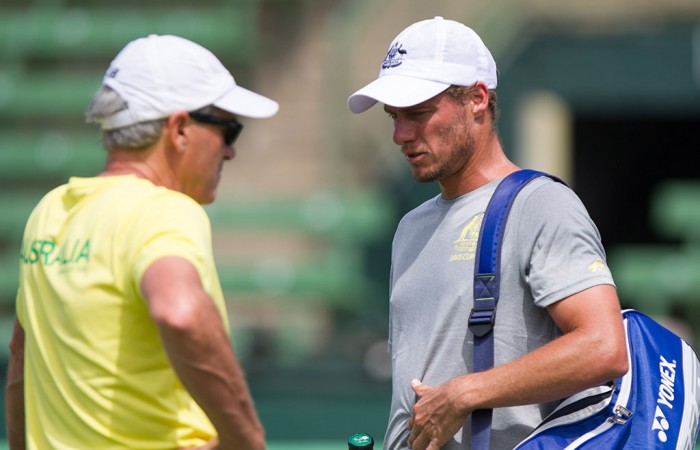 Update 12.15pm: Lleyton Hewitt says he upped his practise once he heard Nick Kyrgios was battling a virus and is ready to come out of retirement for Australia’s Davis Cup tie against the United States if required.

Kyrgios was ruled out before Thursday’s draw for the world group first round tie at Kooyong, with Australian captain Hewitt, who retired in January, taking his place in the four-man team.

Hewitt said he gave Kyrgios every chance to prove he was up to playing but that the 20-year-old was struggling to get out of bed.

“We took him (Kyrgios) through his paces this morning and gave him a little fitness test to see how he pulled up from yesterday but he just wasn’t fit enough to play this weekend,” Hewitt said.

“It’s bad timing for us but it was really out of our hands and the end.”

Hewitt isn’t scheduled to play any match thus far, with Sam Groth promoted to play singles along with Bernie Tomic, and Groth and John Peers slated for the doubles.

But that decision can be changed up till an hour before play, leaving open the possibility Hewitt can inject himself into the doubles on Saturday if he feels Groth needs to be rested for Sunday’s reverse singles.

“We’ll just see how it pans out,” Hewitt said.

“We’ve got to put our best options forward every single day and we will have a look at it after each day’s play and see how Sam plays and pulls up after his singles.”

“We’ve seen how much Lleyton was practising this week and with Nick’s pretty conspicuous absence but it’s certainly not something coming down here that we were anticipating,” Courier said.

In Friday’s opening singles matches Groth is drawn to face American No.1 John Isner before Australian No.1 Bernard Tomic plays their No.2 Jack Sock.

Hewitt, 35, is Australia’s most successful Davis Cup player of all time, having won 58 of the 78 singles and doubles matches he has competed in since his 1999 debut.

He also helped guide Australia to Davis Cup titles in 1999 and 2003, and made his last appearance for Australia in their World Group semifinal loss to Great Britain last year.