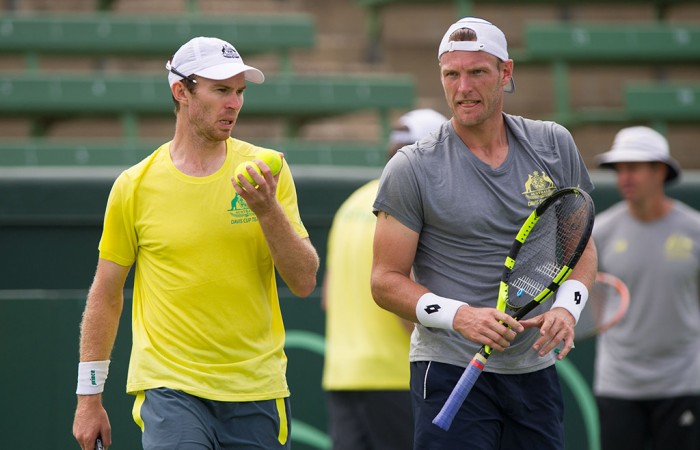 All the focus has been on Australia’s top two players but Davis Cup doubles duo Sam Groth and John Peers say they’re ready to step up.

Groth and Peers are eagerly anticipating their Saturday match with all-conquering American pair Mike and Bob Bryan, knowing it could turn the first-round tie.

The twin brothers boast 16 Grand Slam titles in 30 years of playing tennis together, dating back to their shared childhood.

Groth, 28, and Peers, 27, have been thrown together this year as Australia looks to find a winning doubles combination to sit alongside the singles stars of Bernard Tomic and Nick Kyrgios.

On paper, it looks promising.

Peers has gathered seven doubles titles in three years – six with Jamie Murray, and beating the Bryans in one of those finals. He made two major doubles finals – at Wimbledon and the US Open – in 2015, earning a nomination for the John Newcombe Medal won by Groth.

It was a doubles win in the historic comeback victory in Darwin over Kazakhstan that resuscitated Australia’s hopes last season, and Groth said he’ll call on that experience against the US.

“It’s hard to draw on an experience if you haven’t done it. Now I’ve been in that situation and played a big tie at home at Darwin.

“To have the home crowd playing here in Melbourne on probably my favourite surface, it definitely gives me a lot of confidence.”

Groth could yet be called upon to play singles. Bernard Tomic presented at Kooyong to hit up despite a troubling wrist complaint but in-form Nick Kyrgios is yet to be sighted after adding a virus to his hip injury.

The world No.77 has only one of seven singles hit-outs this season but backed himself to do whatever is needed.

Peers is no stranger to the historic setting at Kooyong, being brought up on the famous courts. He said it didn’t lose its inspirational value.

“It’s always great to get back to Kooyong,” he said.

“It’s a special place, the home of tennis … all you’ve got to do is walk in the front door and see all the memorabilia from past years.”