Nick Kyrgios was forced to retire during the second set of his Dubai Duty Free Tennis Championships semifinal against Stan Wawrinka due to back trouble. 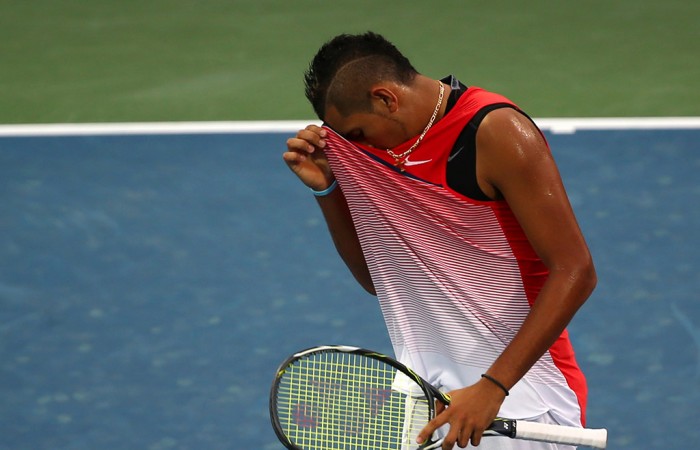 Nick Kyrgios has pulled out injured at the Dubai Tennis Championships, retiring from his semifinal trailing 6-4 3-0 to hand Stan Warwinka a trip to the final.

Kyrgios, winner of a first career trophy last weekend in Marseille and on an eight-match winning streak, fell victim to back problems that required treatment on court after the seventh game of the first set.

The 20-year-old, ranked 33rd, now faces a quick turnaround if he’s to feature in next weekend’s Davis Cup World Group tie against the US in Melbourne on grass.

The Australian’s withdrawal came in the wake of on-form top seed and four-time champion Novak Djokovic’s on Thursday. The Serb could not go on against Feliciano Lopez due to infections in both eyes that came on during the week.

Wawrinka, the reigning French Open champion who has won his last eight finals, will next face former Australian Open finalist Marcos Baghdatis in the final on Saturday at the Aviation Club, after Baghdatis overcame Spain’s sixth seed Lopez.

Wawrinka imposed his authority early in the tie as he twice broke the erratic Kyrgios, who saved break points in the opening game with a pair of aces.

But the Swiss could not hold onto his margin, losing both of the breaks as Kyrgios fought back to 4-all.

Kyrgios collapsed in the second set as he dropped to 0-3 before stopping play due to his back pain.

“He wasn’t really there from the beginning, wasn’t serving his best, but you never know what to expect, with him,” Warwinka said.

“I was focused on myself. I wasn’t expecting anything. I was trying to play my game, to stay tough, stay there, trying to win every point and that’s it.”