Another victory over Tomas Berdych has seen Nick Kyrgios notch his eighth straight win and book a place in the semifinals of the Dubai Duty Free Tennis Championships. 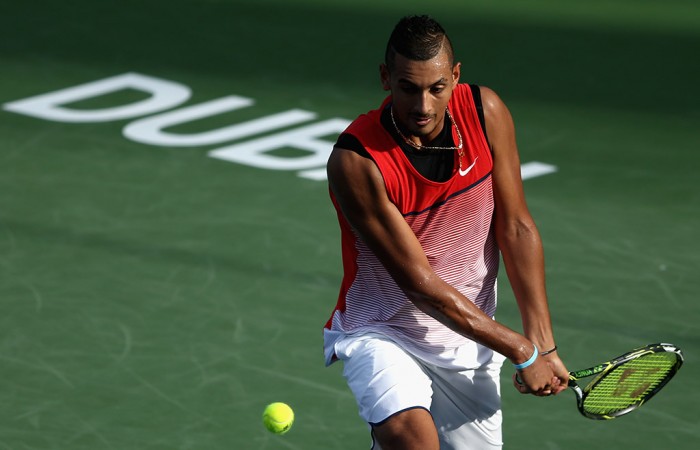 A red-hot Nick Kyrgios stormed to his eighth successive win with an impressive 6-4 6-4 victory over world No.7 Tomas Berdych at the Dubai Duty Free Tennis Championships.

The victory on Thursday saw the Australian book his spot in the last four of the ATP 500 event.

It follows Kyrgios’ maiden ATP tournament success in Marseille on Sunday where he also beat the third-seeded Czech in the semifinals.

He will next meet world No.4 Stan Wawrinka, who brushed aside Germany’s Philipp Kohlschreiber 7-5 6-1 in the quarterfinals.

Kyrgios heads into the clash with the Swiss in the best form of his young career.

Despite struggling with a back problem and food poisoning, he produced a superb display against Berdych, losing just four points on his serve in the second set and sending down 10 aces in a match that lasted just under 90 minutes.

“I wasn’t in the greatest shape, obviously. I think I got a bit of food poisoning last night,” Kyrgios said.

“I was really surprised with the performance I gave out there today, coming out and beating a quality player and in tough conditions. It’s probably my favourite win over the last couple of weeks.

“It’s tough, especially with Tomas. He’s so diligent with everything he does, so professional.

“For me to come out there and put in a great performance like that… I just took my chances when they came.

“Conditions were really fast. When one of us got a pretty good strike, I think the point was pretty much over.