A win over Martin Klizan in the first round of the Dubai Duty Free Tennis Championships has taken Nick Kyrgios' winning streak to six. 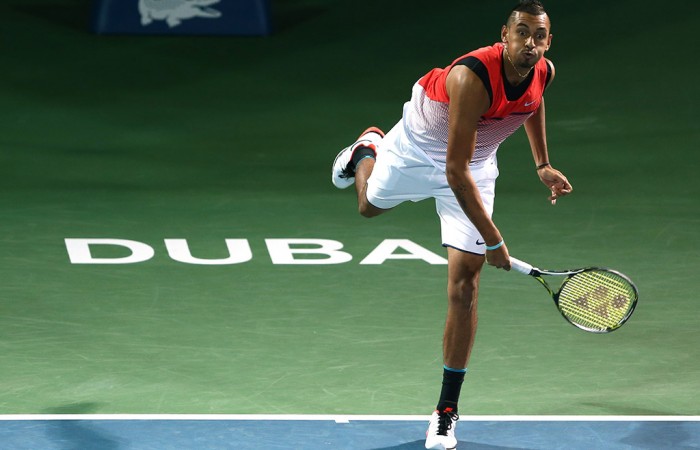 Nick Kyrgios is through to the second round of the Dubai Tennis Championships after coming from a set down to beat seventh-seeded Slovak Martin Klizan on Tuesday.

Kyrgios prevailed 3-6 6-3 6-2 just hours after stepping off a plane from Europe where he won his first ATP event in Marseille at the weekend.

The 20-year-old Canberran got up to his usual tricks of fast play, mixed with moments of apparent nonchalance as he beat a frustrated Klizan, who was unhappy at his opponent’s refusal to remain seated during the 90-second changeovers.

At times Kyrgios looked listless before suddenly switching without warning to top form, but he said his performance was down to the change of conditions.

“Both of us were playing really average today,” Kyrgios said.

“I thought we both struggled with the conditions. Obviously it was really fast and the ball was flying a lot. For me it was completely opposite conditions to what I played (indoors) last week.

“I barely hit at all here, maybe half an hour today, and I wasn’t feeling great. I’m just happy I got through. I was actually pretty excited to get here and play.”

Next up for Kyrgios is Mikhail Kukushkin, who overcame Denis Istomin in two tight sets.