Nick Kyrgios has capped a stellar week in Marseille by defeating 2014 US Open champion Marin Cilic to win his first ever ATP title. 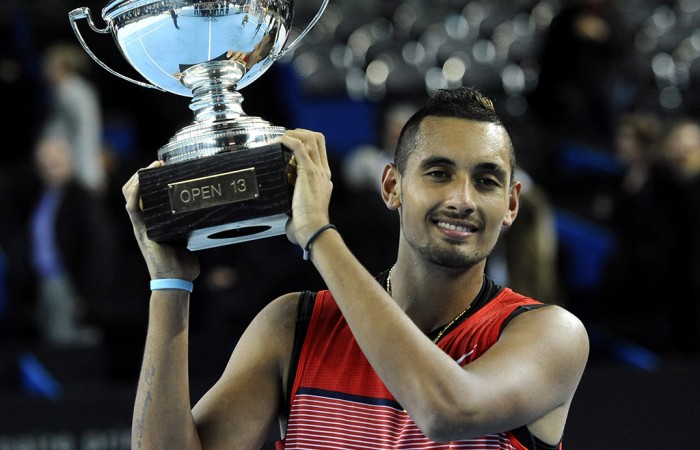 Nick Kyrgios has celebrated securing his maiden ATP title with a stylish 6-2 7-6(3) victory over 2014 US Open champion Marin Cilic in the Open 13 final in Marseille on Sunday night (Monday AEDT).

Australia’s two-time Grand Slam quarterfinalist now closes in on an all-important top-32 seeding for the French Open starting on 22 May.

The 20-year-old is projected to climb to 32nd in the rankings after sweeping to the title in Marseilles without dropping a set in five matches.

His straight-sets dispatch of the 12th-ranked Cilic followed even more convincing wins over world No.10 Richard Gasquet and world No.8 Tomas Berdych, his third-round Australian Open conqueror last month.

“I came here not expecting to win it, to be honest. It was a tough field – Marin, Berdych and guys like this,” Kyrgios said.

“But I played high quality all week. It was a great tournament. I really enjoyed my stay a lot. It’s one of my favourite places and I played really, really well today.”

“The level was really high. I thought we both served really, really well,” he said after prevailing in one hour and 25 minutes on the indoor hardcourt surface.

“The atmosphere in here is really, really good. The crowd is unbelievable.”

Kyrgios thanked his team, including brother Christos, for “keeping me on track all week” after crowning his stay in the south of France with a cheque for 106,175 euros ($A165,000).