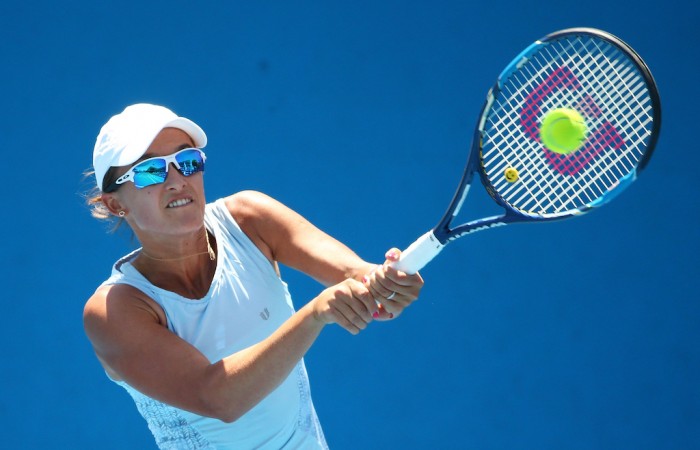 Arina Rodionova has swept aside Aryna Sabalenka to take the $25,000 Perth Tennis International #2 title on Sunday, defeating the unseeded Belarusian 6-1 6-1 in just 55 minutes.

“It felt pretty good out there today,” Rodionova said. “I was able to keep my focus a bit longer. I like playing players like (Sabalenka), big serve and groundstrokes, I was able to mix it up a bit.”

Australia’s recent Fed Cup debutant was quick out of the blocks, rushing to a 3-0 lead. Despite dropping serve in the fourth game she simply dominated proceedings, taking the next eight games in a row and bringing up triple match point.

While Sabalenka salvaged some pride in fighting back to get herself on the board, Rodionova closed the match at the next opportunity to claim her eighth ITF crown.

“My match against Schmiedlova showed me the level that I can play,” Rodionova said of her three-set defeat to the more experienced Slovak in their Fed Cup singles tie a fortnight ago. “It definitely helped.”

Rodionova suffered a disappointing opening round loss in the first Perth event – having only arrived back from Fed Cup duties in Slovakia the night before – but since then the 26-year-old has grown in confidence with every match, culminating in a sublime performance in the final.

“It was tough to get used to the surface,” Rodionova said of her first outing. “But the second week was better, I had two days to practice.

“Cara Black (Rodionova’s coach) also made it here for the second week, so that obviously helped a lot.”

Rodionova started her successful title campaign with a win over teenager Maddison Inglis, who defeated her in the Australian Open 2016 Wildcard play-off final, and also registered a victory over Austrian sixth seed Barbara Haas in the quarterfinals.

Her Belarusian opponent, ranked world No.295, had also been in good touch, reaching the final after defeating West Australian qualifier Storm Sanders in front of a partisan home crowd on Saturday.

Rodionova now moves on to the Pro Tour event in Port Pirie, where main draw action starts on Tuesday.