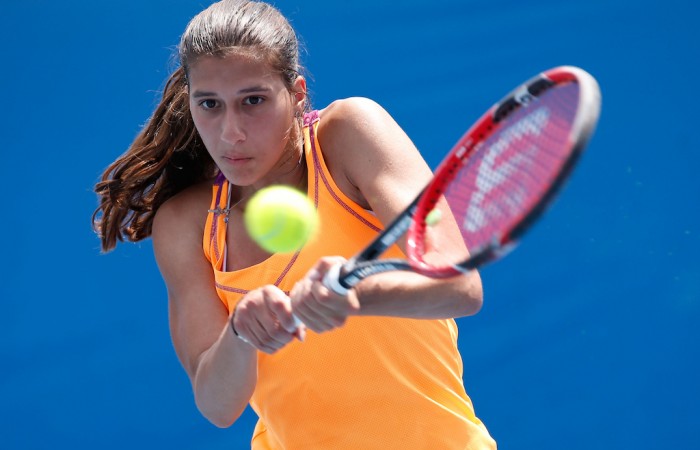 “I’m really happy with how I’ve been playing,” Fourlis said prior to the match. “It’s been really hot here this week but I don’t mind that at all.”

“I will probably be a bit nervous when I first get on court. But after that, I should be fine.”

As it was, despite an ever-so-slight stutter closing out the semifinal, the 16-year-old displayed a maturity beyond her years to oust the Russian former top 100 player in just 80 minutes.

Together with Inglis, Fourlis reached the semifinals of the junior girls’ doubles at the Australian Open in January and she was quick to praise her partner’s recent efforts. Inglis made her Grand Slam debut at Melbourne Park this year alongside Priscilla Hon and Kimberly Birrell.

“They’ve all been playing so well,” Fourlis said of the teenage trio. “I’m a year younger, so to see what they’ve done is really inspiring.”

She now faces Korean Jang Su Jeong in the final on Sunday, after the No.5 seed came from a set down to edge past American qualifier Jennifer Elie 6-7(5) 6-4 6-4.

Meanwhile, Ash Barty’s return to the game has gained some momentum, as she and partner Jessica Moore continued their run in Perth, outlasting Victoria’s Tammi Patterson and Katarzyna Piter of Poland 7-6(6) 3-6 [10-2] to reach the doubles final.