Fed Cup team heading back ‘where we belong’ 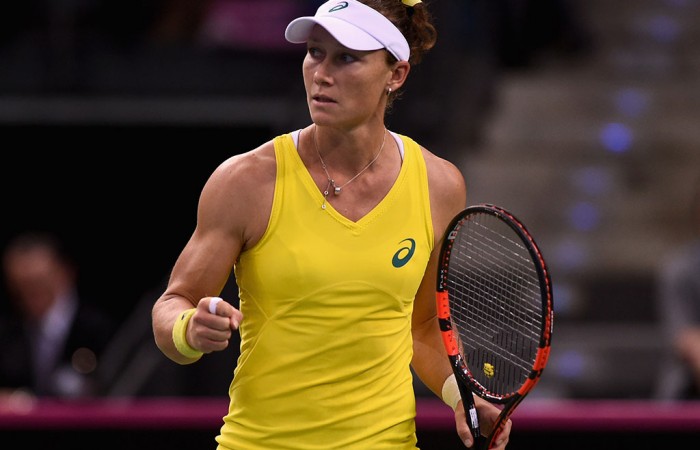 Australia’s Fed Cup team is ready to fight its way back to “where we belong” in the elite Fed Cup World Group, according to captain Alicia Molik.

With veteran pair Sam Stosur and Casey Dellacqua locked in for the tie, along with teenage world No.296 Kimberly Birrell, Molik will use Thursday’s practise session in Bratislava to decide between No.314 Arina Rodionova or No.355 Storm Sanders for the fourth spot – with the captain conceding she will pick whoever shows the greater adaptability to the indoor hard court.

And they will be tasked with atoning for last year’s Fed Cup defeat, in which Australia gave up their spot in the World Group to the Netherlands in a lost tie which still burns Molik.

“We’re incredibly eager to get back into the World Group. That was really disappointing and hurt for a long time,” Molik told AAP.

“We shouldn’t be in this position but we’ve got to earn our way back.

“It’s not a right, and I think that’s what the team understands as well.

“We let ourselves down last tie so (against Slovakia is) about a bit of redemption and fighting for where we belong.”

Due to ITF eligibility rules summer sensation Daria Gavrilova is unavailable for the tie. However, Molik can call on dependable veterans Sam Stosur and Casey Dellacqua.

“We are heavily reliant on Sam and I feel like that’s a really fortunate position to be in because I know how good she is in coming through with the goods at Fed Cup,” Molik added.

“Having Sam and Casey is critical – and not just for the competition weekend on Saturday and Sunday.

“I think it’s just the calmness and professionalism in the preparation for the weekend as well, which both rubs off on the rest of the team and sets a high standard.”

Dellacqua, who this week rose to a career-high world No.3 doubles ranking, shapes as a crucial figure in silencing a vocal home crowd and dangerous Slovakian team boasting world No.29 Anna Karolina Schmiedlova, No.66 Dominika Cibulkova and former world No.5 Daniela Hantuchova.