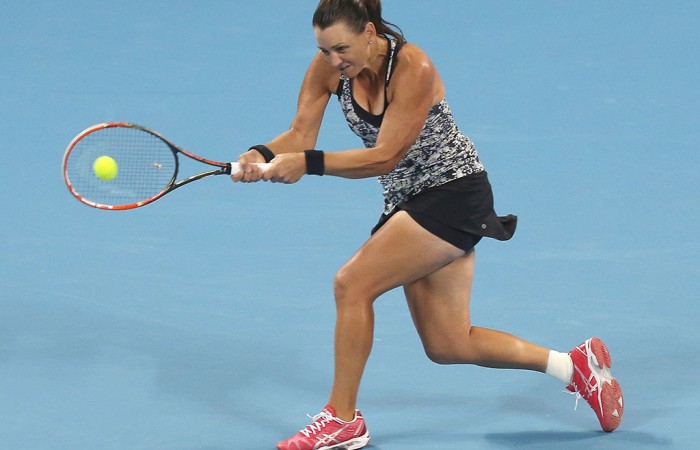 Returning Australian Fed Cup cog Casey Dellacqua will not be hindered by her four-month concussion-enforced hiatus, which she described as the toughest period of her career, captain Alicia Molik insists.

The 30-year-old Dellacqua is on the comeback trail following the concussion suffered when her head hit the hard court during a doubles match in China in October and which took her out of competition for the entire Australian summer.

Dellacqua, who enjoyed career-best form in 2015, said she suffered from the post-concussion symptoms of headaches, poor sleep, memory loss and “constantly (being) in a state of drowsiness or in a complete fog”.

“It was honestly some of the scariest stuff that I have been through,” she wrote in a blog.

“I was so desperate, but I struggled to do even daily activities such as the grocery shopping.”

Dellacqua will be a key pillar for Molik as Australia attempt to fight their way back into the Fed Cup World Group, starting with a first-round World Group II tie against Slovakia in Bratislava this weekend.

With Daria Gavrilova and Jarmila Wolfe both unavailable, Casey is Australia’s second highest-ranked singles player behind No.27 Sam Stosur – and as the No.3-ranked doubles player in the world, she’s a certainty to lead Australia’s charge on that front.

She has been back training for six weeks and is “fully fit” according to Molik, who has no concerns about giving the left-handed star both singles and doubles duties this weekend.

“She didn’t want to come back being in a competitive environment until she was healthy and had had enough training under her belt,” Molik told AAP.

“It has been a while since she’s played on a competition court, but I guess in the whole scheme of things she’s had so much tennis under her belt over the last 30-odd years.

“There’s a lot to rely on. It couldn’t be a more perfect environment for her to return.

“She’s been here many times before, she’s played a lot of pressure matches and is versatile as well for us.

“Casey’s played a lot of high-pressure matches and clutch situations, and her grand slam record, particularly in doubles, over the past 12 months speaks for itself.”