Alex De Minaur and Blake Ellis have come from behind to claim the 2016 Australian Open boys' doubles title. 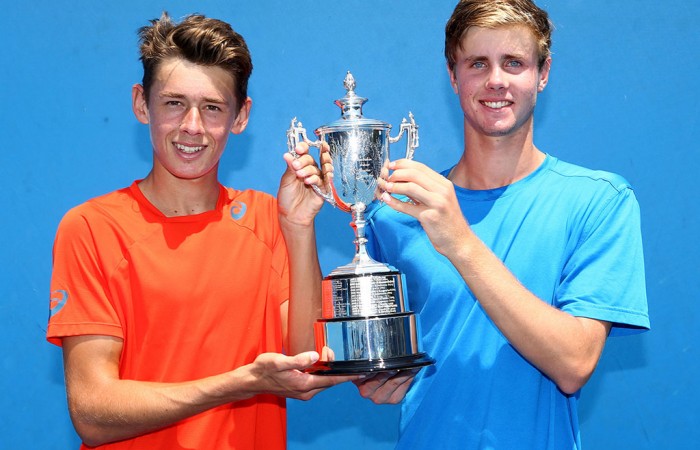 De Minaur, 16, was eliminated in the singles semi-finals on Friday but rebounded on Saturday to team with 17-year-old Queenslander Ellis.

The pair came from behind at Melbourne Park to upset eighth seeds Lukas Klein of Slovakia and Czech Patrik Rikl 3-6 7-5 12-10.

“It’s an amazing feeling, we’ve worked pretty hard for this and it’s just been great to get out there and have a tough match to finish with so many ups and downs, the crowd out there was just amazing,” De Minaur said.

“I can’t put it into words, being a Grand Slam Champion, its really exciting because I get to do it with a mate.”

The pair, despite living on opposite sides of the world, get along perfectly, which as Ellis says, makes the partnership a fantastic combination.

“I think it really helps that we are such good friends off-court, we hang out a lot, We can pick each other up when we are down or fight through tough times like saving that match point today,” Ellis said.

“We try to keep it nice and relaxed on-court, we never really get angry at each other,” De Minaur added.

“If anything, we just joke around to keep the mood light, I think we compliment each other well.”