Sara Tomic, Alex De Minaur and Oliver Anderson each chalked up wins to progress to the semifinals of the juniors at the Australian Open 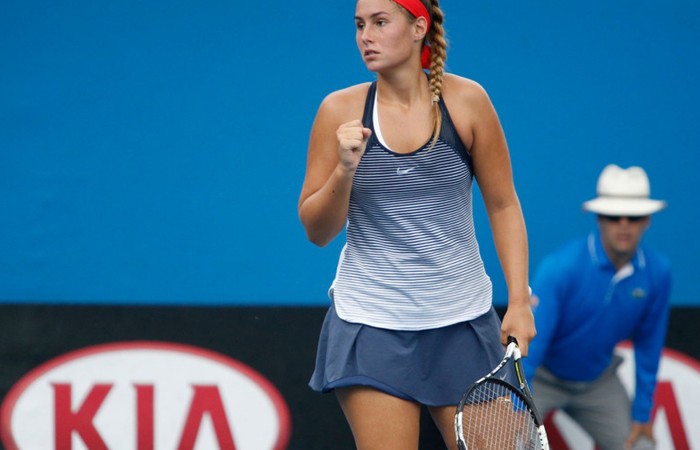 Australia has a strong representation at the business end of the junior tournaments at Australian Open 2016, with three locals advancing to the semifinals in the boys’ and girls’ competitions on Thursday.

In the girls’ singles, Sara Tomic progressed to her first semifinal at a Grand Slam, her previous best being a third-round appearance at the Australian Open in 2015.

Tomic battled through a stomach complaint to overcome fellow Queenslander and friend Baijing Lin to win 6-1 5-7 6-2 in an hour and 52 minutes on court.

“Honestly, I didn’t even tell my team that I wasn’t really feeling good. My stomach was hurting,” Tomic said.

“I had to take some tablets after, and mentally I wasn’t focusing. But I’m really hungry for winning, and I truly want to do well and always do my best on the court.”

After promising to put a greater emphasis on training and fitness in the off-season, Tomic plays with great maturity for her age, remaining calm during critical break-point moments.

“I’ve been improving my weaknesses, which is getting to the ball,” Tomic said. “So now I can actually run to the ball and I feel like my defence has definitely improved.”

Older brother Bernard, currently Australia’s highest-ranked male player at world No. 17, won the Australian Open boys’ title when he was 15 in 2008 and then the US Open junior championship in 2009.

Aiming to do the same, the Tomic siblings would complete a rare double if Sara were to go all the way – the last brother-sister duo to achieve the feat were Lorraine and Will Coghlan in 1956 and 1960 respectively.

“It’d really be a dream to be on the board.”

On the boys’ side, Australian pair Alex De Minaur and Oliver Anderson were among the quartet who reached the penultimate round at Melbourne Park.

It was a big scalp for the 16-year-old, who used his aggressive net play to overcome his Greek opponent.

The Spanish-based Australian was happy to progress to the last four, a feat he achieved last August at the US Open, but says the Australian crowd makes this year’s run so much more enjoyable.

“It’s always amazing to make a semifinal, but doing it here means a lot more to me because it’s my home town,” De Minaur said.

“I can’t wait until I get out there tomorrow in front a big crowd like it was today. It was some amazing support – it felt unreal and something I haven’t really felt before.”

De Minaur will be looking to continue his run when he faces seventh seed Jurabeck Karimov of Uzbekistan on Friday.

Granted a wildcard for the tournament, Anderson said he overcame a disappointing first set to advance 3-6 6-4 6-4 in two hours and six minutes on court.

“But my coaches were encouraging me from the sidelines, and I kind of knew that I was flat. I just had to pick myself back up with some positive self-talk.”

Anderson leapt to the forefront of the Australian tennis scene after the 17-year-old defeated world No.108 Tim Smyczek to qualify for the Brisbane International earlier in January.

Since then, expectations had been high coming into his first junior slam tournament.

“Making the semifinals is pretty good from my expectations, but eyes are on the prize,” he said.

“Ideally I’d like to keep going, but we’ll see how that ends up.”

Anderson will face No. 5 seed, Korean Yunseong Chung, for a place in the boys’ final.