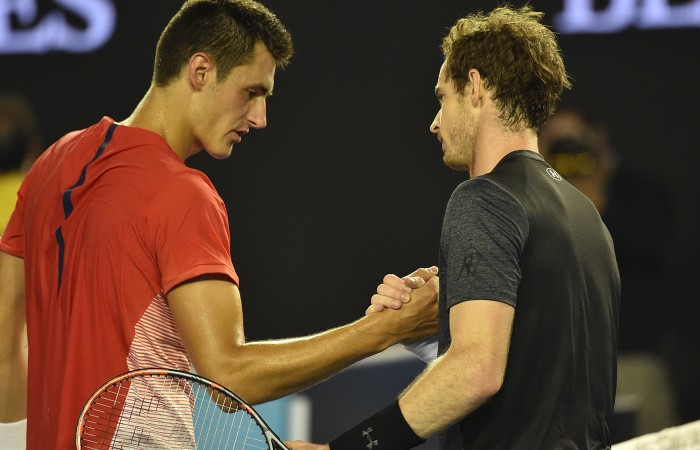 Tennis supercoach Darren Cahill has urged Bernard Tomic to bring more intensity to the practice court in his ongoing bid to bridge the gap on the grand slam giants.

It was the seventh time that either Murray, Novak Djokovic, Roger Federer or Rafael Nadal had been a mid-round roadblock for Tomic at a grand slam.

Cahill, who helped Lleyton Hewitt become the youngest-ever year-ending men’s No.1 and then Andre Agassi the oldest, would like to see a more energised Tomic – and says that starts at training.

Cahill made the interesting observation during Tomic’s latest loss to Murray that the reason the Australian No.1 always looked like he was playing at 50 per cent was because his father had put him through endless practise sessions all his life.

“The only way he can get through them is by conserving energy,” Cahill said from the ESPN commentary box.

“He’s on the court for four or five hours every day. It’s impossible … he doesn’t know a hundred per cent.”

Cahill wasn’t suggesting Tomic doesn’t give his all, merely that his famously laconic playing style was a by-product of the relentless sessions.

Tomic maintains he’s on the right track and sooner or later will reach a point where he’s comfortable competing with the heavyweights of men’s tennis.

“Novak is one in the world and Andy is two. That’s the reason they’ve won so many grand slams,” he said.

“They’re the best in the world. There’s no better than them now.

“I need to get a little bit fitter.

“I know what it takes to get there. I’m going to work as hard as I can.”

During Murray’s post-match press conference, the Scot defended harsh criticism of the 23-year-old.

“Obviously if he can start getting a few more wins against the top players, that would help. But it seems like he gets a bit of a hard time,” Murray said.

“I think he’s the youngest player in the top 20. Most years he makes improvements. He’s the No.1 player in Australia.

“Obviously if he can be consistent throughout the year, it’s normal for young players to have ups and downs.

“But he seems to be playing more consistent tennis. He’ll definitely keep moving up the rankings.”