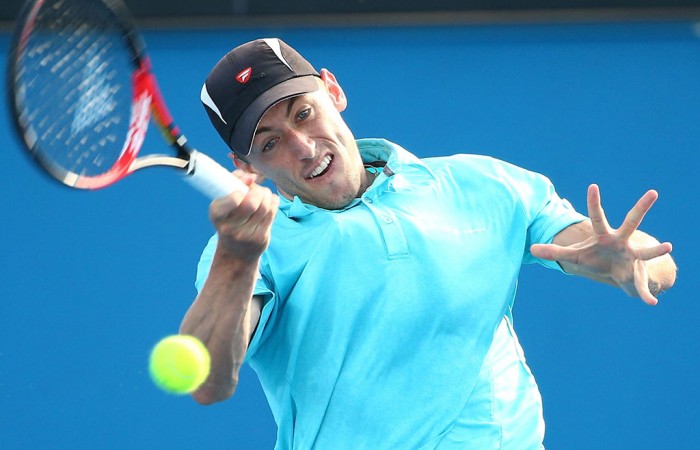 Queenslander John Millman has gatecrashed the last 32 of the Australian Open, earning a career-best win in five sets over Gilles Muller.

The Australian was heading for the Melbourne Park exit door, down a set and a break before recovering strongly.

Muller, the world No.38, regained his touch to take the match into a fifth set.

In the deciding set, the pair swapped breaks amid high tension.

Millman earned match points at 6-5, and the crowd sighed when the 26-year-old made a fine passing shot on Muller’s second serve, only for a let to be called.

But he recovered to end the contest on the replay, a fitting reward for his graft.

The popular Aussie enjoyed his victory, spending plenty of time signing autographs and taking selfies with fans who enjoyed the ride.

His prize is a third-round date with fellow Queenslander Bernard Tomic or Italian Simone Bolelli.

In pure rankings terms, the world No.95 has enjoyed better victories, but none on a similar stage or with such drama.

Show court three was transfixed by his recovery in a topsy turvey match. Millman was unable to lay a glove on Muller’s serve for the opening hour, failing to bring a single break point.

He came back strongly in the second set, recovering from a break down to capture two of his own and level the match.

Powering on, Millman removed the errors and added adventure to his game – coming to the net for the first time in the third set.

In the battle of two baseliners, Millman wrested control of the contest and edged ahead in style, rediscovering his touch to close out the match in the fifth.

The Queenslander joins Nick Kyrgios and Daria Gavrilova as Australia’s contingent in the third round.