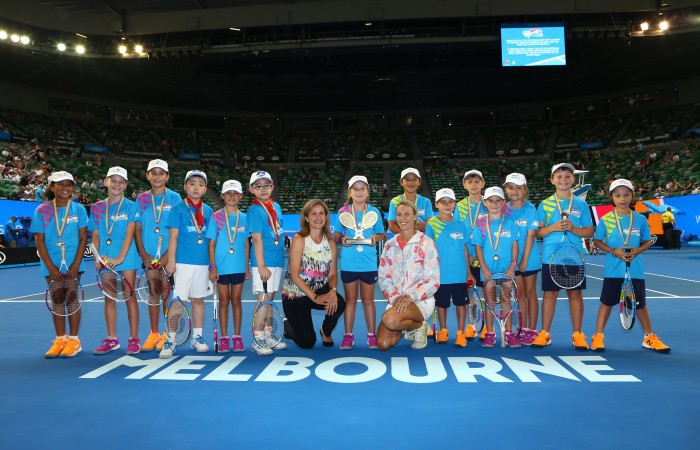 Chantelle McCormack from Arthurs Creek, Victoria, was today announced as the 2015 ANZ Tennis Hot Shot of the Year at an official ceremony held on Rod Laver Arena.

The annual ANZ Tennis Hot Shot of the Year competition recognises budding tennis stars from around Australia for their participation, enthusiasm and enjoyment of the game whilst demonstrating sportsmanlike qualities amongst their peers. During 2015, one participant was recognised each month and declared a nominee.

This week the twelve chosen tennis enthusiasts had a VIP experience at Australian Open 2016, including a behind the scenes look at the tournament, the chance to watch some of the world’s best on court and the opportunity to rally with former world No.8 Alicia Molik on the tournament’s most prized court, Rod Laver Arena.

For winning the award, Chantelle has won an exclusive prize of $5,000, one year of free tennis coaching as well as a visit from Molik to their local tennis club for a private lesson with three friends.

“This has been the best day of my life, I’m so excited to share my prize with my coach Paul and friends at the tennis club,” said Chantelle, who plays at St Luke Tennis Club in Thomastown.

“At ANZ we’re committed to supporting grass roots tennis clubs and players from all over Australia. We’re proud to be able to offer emerging talent the opportunity to showcase their skills through the ANZ Tennis Hot Shots Program,” said Carolyn Bendall, ANZ Head of Marketing Australia.

ANZ Tennis Hot Shots is Tennis Australia’s official development program specifically designed for primary school-aged children between five to 12 years of age. In 2014/2015 the program had 196,834 registered participants in Australia.