It doesn't sit easily with James Duckworth that he could be the man to end Lleyton Hewitt's career. 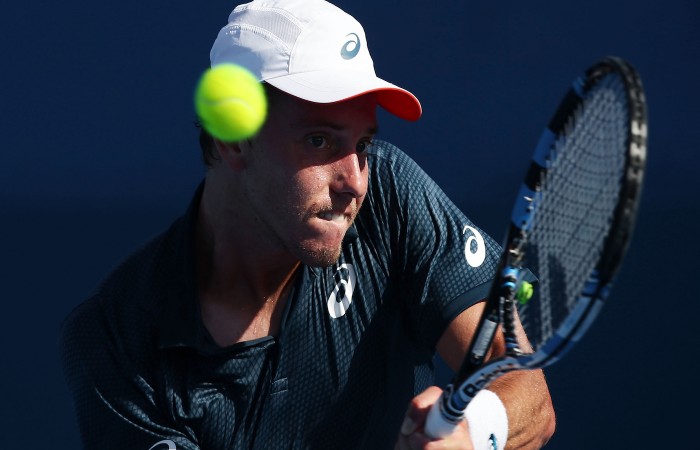 It doesn’t sit easily with James Duckworth that he could be the man to end Lleyton Hewitt’s career.

The Sydneysider would normally have been delighted to be paired against a world No.306 in the first round of the Australian Open.

But when that player is among your childhood idols playing in his farewell event, it’s more than a little bittersweet.

Duckworth said he’d shared a joke with Hewitt about being drawn to play off with the 34-year-old on Tuesday.

But the world No.134 admits he doesn’t know how to approach a match that could retire one of his heroes.

“It’s not something that I’d like to do,” Duckworth said on Sunday.

“It’s pretty weird playing him. I looked up to him for a long time.

“Watched him win Grand Slams, be world No.1.

“I guess if I win, I’ll apologise to him.

“I’m going to have to sort of put that out of my mind and go out there and try to play my game, give it my best shot.”

Duckworth was 13 when Hewitt made his memorable 2005 Open run, staying up late to watch five-setters with Rafael Nadal and David Nalbandian before the local hero fell to Marat Safin in the final.

“I was pretty gutted when he lost,” Duckworth said.

The 23-year-old has some way to go to match Hewitt’s 20 Australian Opens, but has seen enough of them to know it will be the biggest match of his career on the biggest stage at Melbourne Park.

“It should be a packed house here on Rod Laver,” he said.

Duckworth also recognises where the crowd sentiment will be.

“I don’t think I’ll have the same sort of support that I’ve had in previous, having 99 per cent of the crowd,” he said.

“Hopefully a couple people will still be cheering for me.”