Hewitt out to cause some Open damage

Lleyton Hewitt says he can make a fairytale deep run in his Australian Open swansong. 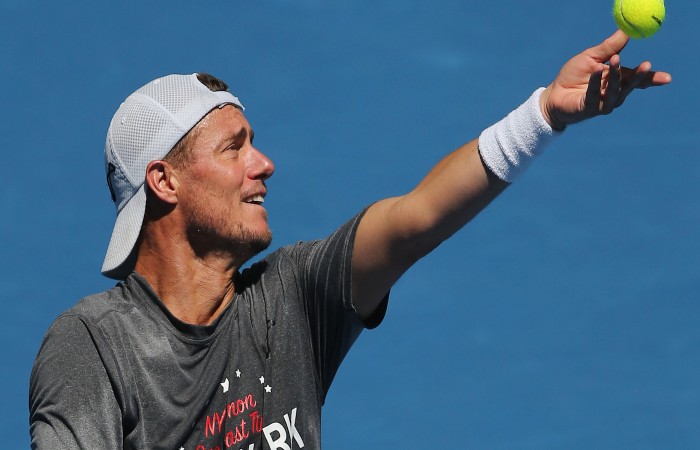 His game face well and truly on, Lleyton Hewitt says he can “absolutely” make a fairytale deep run in his Australian Open swansong.

Hewitt’s immediate focus is firmly on seeing off young countryman James Duckworth in the first round on Tuesday.

But, a consummate professional to the very end, Hewitt has deployed Grand Slam heavyweights Roger Federer and Andy Murray as Melbourne Park hitting partners to ensure he’s ready for any final challenge that confronts him over the coming fortnight.

“I go in thinking I can be competitive with these guys, absolutely,” Hewitt said on Saturday.

“I’m not looking past `Ducks’, though, at all. Got to take it one match at a time and focus on that.

“It’s important to do that, but I feel like I’m hitting the ball well enough to push a lot of guys out there. Hopefully the body holds up.”

After playing a series of exhibition matches around the country, the baseline warrior practised with Federer on Friday and Murray on Saturday to fine-tune his game and says it’s on song entering his record 20th consecutive Open campaign.

The 34-year-old has only once progressed beyond the fourth round – in 2005, when he lost the final to Marat Safin.

But he sees no reason why he can’t push into the second week one last time.

“Played pretty good in the Hopman Cup. Had the FAST4 in Sydney, which is a good hit-out. Played two really good quality matches in Adelaide actually.

“I feel like just to get that match toughness back, into the routine of playing matches again, the last two weeks has been good.”

Hewitt has only ever played one fellow Australian at his home slam – Todd Larkham back in 2003 – but the newly-appointed Davis Cup captain said “it was bound to happen” that he’d draw another for his opener in his farewell tournament.

“Especially now that I’ve got a second hat on, a fulltime job as Davis Cup captain,” he said.

“Yeah, it’s awkward, but in another way it’s fun to go out there with `Ducks’.

“I’ve been helping him the last few years. He’s been part of the Davis Cup squad on a number of occasions. He’s a great kid.

“I think he’s going to push on the next couple years and get a lot better.”

The former world No.1 said he and Duckworth, who trained together at Hewitt’s Sydney base over the summer, had been texting each other before Friday’s fateful draw.

“So, yeah, obviously I think both of us will look back on it,” Hewitt said of their nostalgic Open clash.

“No matter what happens, it will be a satisfying enjoyment of going out there and playing against him.

“It’s his only opportunity to play against me obviously on a big court as well.

“I think later on in our career, his career, me once I’ve retired, it’s something that we’ll enjoy.”