Samantha Stosur has swept into the Apia International Sydney quarterfinals for the first time in 11 years. 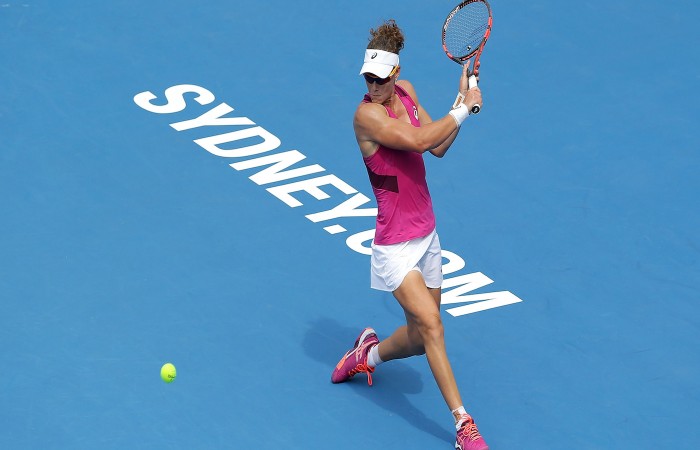 Samantha Stosur has swept into the Apia International Sydney quarterfinals for the first time in 11 years.

Australia’s 2005 runner-up plundered eight aces and only faced one break point on her serve all match in casting aside Slovakian veteran Daniela Hantuchova 6-4 6-2 in just 85 minutes on Tuesday.

Stosur next faces either qualifier Monica Puig or Slovakian Anna Karolona Schmiedlova for a place in the semifinals as she continues her promising build-up to next week’s Australian Open in Melbourne.

With the seeded big guns continuing to drop like flies, Stosur’s hopes of reaching the final have soared just days after the 2011 US Open champion was in doubt to even play as she battled a wrist injury.

Kerber is the final member of the women’s top 10 to have suffered a pre-Open setback in the past week.

“I’m very sorry I can’t go on court today but I’m not feeling 100 per cent. I started to feel unwell yesterday and today my stomach is not right,” she said.

“I don’t want to risk my health before Melbourne, of course, but I love to come back to the Apia International Sydney and always have good results here – semifinals last year and the final two years ago.”

Pliskova is looking ominous after breezing into the last eight with a 6-3 6-0 win over Russian Anastasia Pavlyuchenkova.

The 2015 Sydney runner-up has yet to drop a set in her two matches and is on course for a quarterfinal showdown with top seed Simona Halep, who takes on Frenchwoman Caroline Garcia on Tuesday night.

Down 5-2 in the second set, Errani fought back to win 7-6 (3) 7-6 (8) and book a date with either big-hitting German Sabine Lisicki or Russia’s dual grand slam champion Svetlana Kuznetsova.