Promising Australian tennis player Omar Jasika says he wakes up pinching himself that he's about to play in his first grand slam tournament. 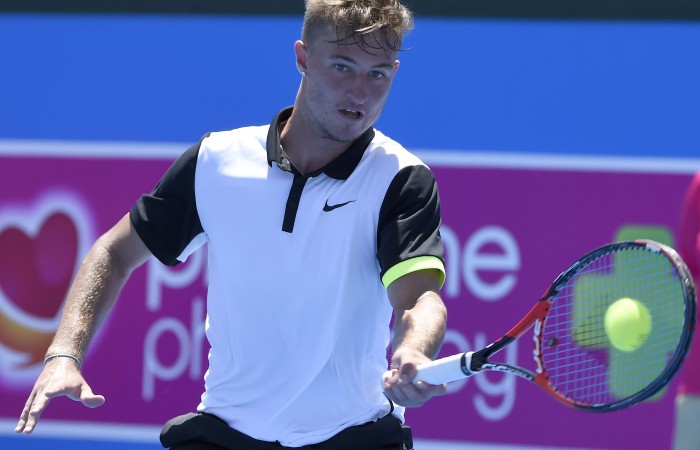 Promising Australian tennis player Omar Jasika says he wakes up pinching himself that he’s about to play in his first grand slam tournament.

The 18-year-old from Melbourne was granted a wildcard in December for next week’s Australian Open and said he had bounced out of bed ever since.

“I wake up every morning and it excites me; it comes into my head – the Australian Open – and I get pumped for it.”

Jasika has the credentials to join the wave of young Australian talent like Nick Kyrgios and Thanasi Kokkinakis making inroads on the international tour.

He won the US Open boys singles and doubles titles in 2014 – the first time in 28 years a player had claimed both crowns.

“It was my last junior tournament so to finish like that was incredible,” Jasika said.

“My ranking dropped from 30 to top five and even though it was my last tournament that still meant a lot to me.”

Jasika started his preparation for Melbourne Park at the Kooyong Classic with a 6-4 6-3 loss to another rising star, South Korean teenager Hyeon Chung.

Jasika couldn’t match the consistency of 19-year-old Chung, who has soared through the rankings to world No.51.

“The conditions were tough as it was windy but I enjoyed it,” Jasika said.

The local youngster actually beat Chung in three sets last April on his way to the quarter-finals of the ATP Challenger event in Guadeloupe.

Jasika wears the same big diamond stud favoured by Kyrgios but doesn’t have the same flashy style, relying on a steady forehand to break down his opponents.

He said he’d learnt plenty from the recent experiences of the 20-year-old Kyrgios.

“It’s not easy for beginners but we’re all close friends and they’ve taught me a lot,” he said of Kyrgios and Kokkinakis.

Jasika is expecting plenty of support at the Open from his friends and family, who emigrated from Bosnia before his birth.

While his favourite player is another left-hander in Rafa Nadal, he has no preference of who he meets.

“If I play top seed it would be be good to see where I’m at but everyone is tough,” he said.