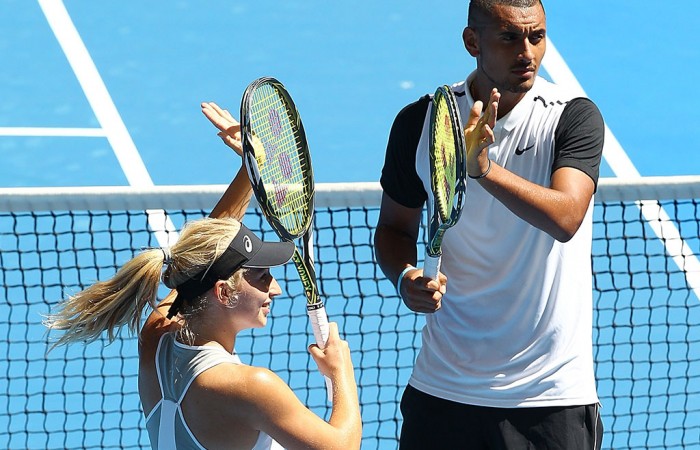 Australia Green are into the Hopman Cup final after saving a match point to beat France in a thrilling mixed doubles encounter.

Needing to win the tie to reach Saturday’s final against Ukraine, Australia Green secured a 2-1 result with a 6-4 2-6 11-9 (match tiebreak) win in the mixed doubles.

Kyrgios and Daria Gavrilova will now take on Ukrainian duo Alexandr Dolgopolov and Elina Svitolina in the decider.

Australia’s only Hopman Cup title came back in 1999, when Mark Philippoussis and Jelena Dokic took out the crown, beating Swedish pair Jonas Bjorkman and Asa Carlsson in the final.

The last time Australia reached the final was in 2003, when Lleyton Hewitt and Alicia Molik were defeated 3-0 by Serena Williams and James Blake.

Kyrgios said it would be special if he and Gavrilova could reach the final and end Australia’s 17-year title drought at the mixed-teams event.

“It’s an event that’s been held for a long, long time – before I was even born,” Kyrgios said.

“It’s pretty special. Especially me and Dasha – we grew up together in juniors. Hopefully we can bring it home.”

Australia Green were down a match point in the mixed doubles match tiebreak.

But a deft volley at the net from Gavrilova saved Australia’s skin, before Kyrgios sealed the win with some net magic of his own.

“I was feeling the heat there,” Kyrgios said of the match point moment.

Earlier in the night, Kyrgios continued his hot singles form with a 6-4 6-4 demolition of Kenny De Schepper in 56 minutes.

But Australia Green’s finals hopes were dented after Gavrilova lost 6-4 7-6 (9-7) to Caroline Garcia.

Gavrilova put up a good fight for most of her singles match, but two double faults during the second-set tiebreak proved costly.

However, after a few nervous moments, Kyrgios and Gavrilova came good in the mixed doubles match tiebreak, holding their nerve when it mattered most.

The result meant Australia Green, and not Great Britain, reached the final.

Kyrgios is unbeaten in his three singles matches at the Hopman Cup, with the most impressive display a straight-sets demolition of world No.2 Andy Murray on Wednesday night.

After completing his Hopman Cup duties, Kyrgios will compete in the Fast4 Tennis event in Sydney on Monday, before heading to Melbourne for the Kooyong Classic.

“I have played three quality matches and put in a lot of training,” Kyrgios said.

“But there is still a long way to go and I’ve still got to do a lot more things to prepare for the Australian Open.”

For more from the Hopman Cup visit hopmancup.com