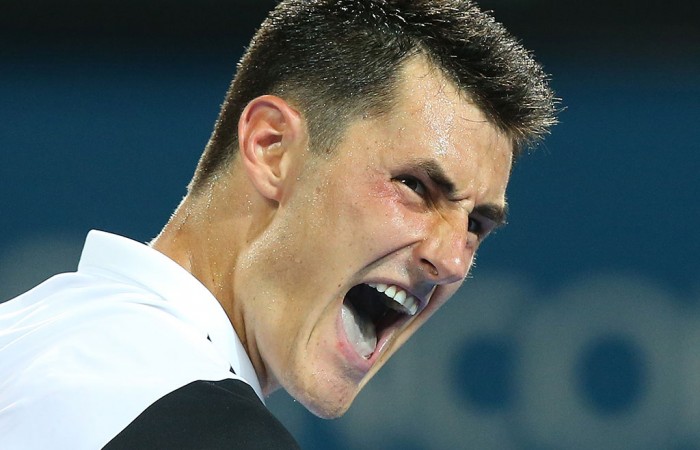 Bernard Tomic says he is a markedly better player compared with this time last year as he prepares for another Brisbane International quarterfinal against Japanese star Kei Nishikori.

The last remaining Australian hope at the tournament in either the men’s or women’s singles, Tomic scraped through with a second-round victory over Czech veteran Radek Stepanek 7-6(6), 4-6, 7-6 (4) in a nail-biting match that went nearly two and a half hours.

Stepanek, who won the Brisbane event in 2009, might be 14 years his senior but proved a thorn in Tomic’s side all evening and looked poised to defeat the Gold Coast product for the fourth time in as many years.

But a tiring Tomic fought back and, aided by some errors from his opponent in the third-set tiebreaker, closed it out in style to set up his clash with Nishikori, who breezed past Kazakhstan’s Mikhail Kukushkin 6-3, 6-4 earlier on Wednesday.

“I knew tonight was not going to be easy,” Tomic said.

“He’s a former champion here, a former finalist here, and I know my position, myself when I play in tournaments that I’ve won in the past, I get that motivation, that feel, and he was playing very good today.

“The way he covers the net shows why he’s an amazing athlete the last 10 years on the tour. I cannot think of another person that volleys that great like him.

“Even if I lost this match, (it) was an amazing feeling to be on court playing that sort of tennis with such a quality player.”

Tomic was no match for Nishikori, the two-time Australian Open quarterfinalist, who won in straight sets when they met here last year.

However, the 23-year-old needs to defeat second seed Nishikori for the first time in his career to ensure the smoothest path possible at the Open.

Currently ranked No.18 in the world, Tomic is aiming for at least a semifinal appearance in Brisbane as he seeks a top 16 seeding for Melbourne.

Beating Nishikori will require a much higher level of performance from Tomic, who started slowly to trail 2-5 at one stage in the first set and was broken twice by Stepanek in the second.

“Maybe I can get off to a better start than I did last year where he won the first set 6-0.

“He played very, very well and he’s been playing great tennis the past four years, and especially last year.

“He’s a very tough player to beat. I have to try and focus on my weapons. I will get chances for sure.”