Bernard Tomic has begun yet another Australian campaign strongly with a straight-sets victory over Nicolas Mahut at the Brisbane International. 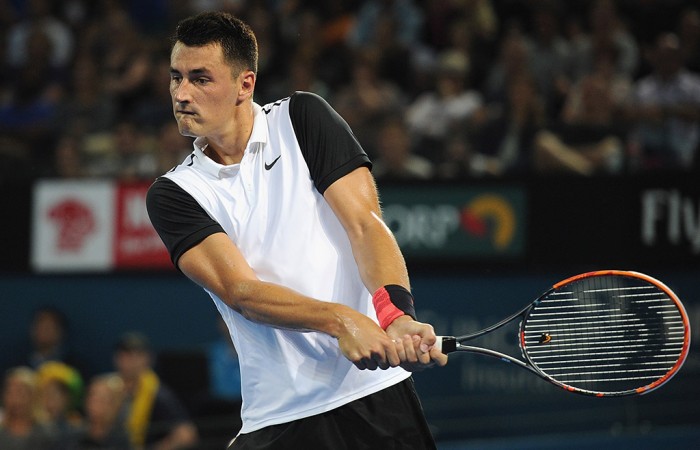 The world No.18 booked a second round clash with former Brisbane champion and Czech veteran Radek Stepanek.

It is a positive start for the former Wimbledon quarterfinalist who aims to crack the world’s top 10 this year.

Tomic, 23, also hopes to make a habit of turning Brisbane success into an Australian Open run.

He made the Brisbane quarterfinals last year, before making his second consecutive Australian Open fourth round appearance.

Tomic was broken by world No.71 Mahut to trail 4-3 on Tuesday night but rattled off the next three games to clinch the first set.

He kept his foot on Mahut’s throat, closing out the match in just 69 minutes.

Next he will aim to overcome Czech veteran and former Brisbane champion Radek Stepanek on Wednesday night to seal a third straight Brisbane quarterfinal berth.

He must make at least the semifinals to earn the prized top-16 seeding for the Australian Open.

Injured world No.9 Richard Gasquet’s withdrawal from the year’s first Grand Slam event has opened the door for Tomic to notch the all-important position in the Melbourne draw.

A top-16 seeding will ensure Tomic avoids the likes of big guns Novak Djokovic, Andy Murray and Roger Federer until at least the fourth round.

The portents are good – nearest rival for the 16th seeding, No.17 Feliciano Lopez of Spain, crashed out in the Qatar Open first round this week.

“Obviously a very big delight that he lost first round,” Tomic laughed after beating Mahut.

“I mean, I like Feliciano. He’s a great guy, but (his loss) kind of went to my favour. And obviously with Gasquet pulling out. Now is the big chance – it now comes down to a match or two.”

Five years after becoming a Wimbledon quarter-finalist at just 18, Tomic is full of confidence following his best year yet.

He started 2015 a lowly world No.78 but won 40 matches including a third career ATP title to finish with a new high of 18.

“I feel closer and closer to them,” he said.

“Having an opportunity playing these guys the past four, five years I’ve learnt a lot. I know I’m there. I have to keep pushing and working and my opportunities will come.”

Tomic is the sole Australian left standing at the Brisbane International.