Australia Gold has defeated the USA 2-0 at the Hopman Cup on Tuesday night after a vintage performance from Lleyton Hewitt. 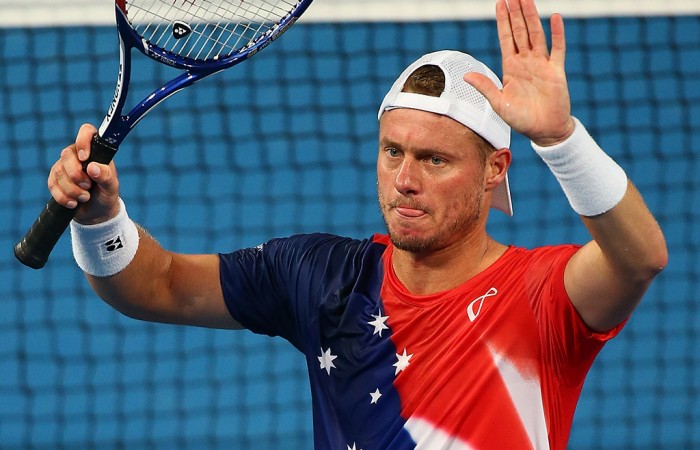 Update 8.45am: Lleyton Hewitt’s masterful 7-5 6-4 victory over American Jack Sock has given Australia Gold an unassailable 2-0 lead over the USA at the Hopman Cup.

Following Jarmila Wolfe’s victory over Serena Williams – which came after Williams retired in the second set due to knee inflammation – Hewitt came out and thrilled the packed Perth Arena with a vintage performance.

The final result was 3-0, after Williams pulled out of the mixed doubles. She was replaced by Victoria Duval, but the result counted as a 6-0 6-0 walkover victory to Australia.

Australia Gold, who lost 3-0 to the Czech Republic on Sunday, will reach the Hopman Cup final if they can beat the undefeated Ukraine on Thursday.

Hewitt is appearing at his eighth Hopman Cup, but he is yet to taste trophy success in the mixed-teams event.

“I hadn’t thought about that at all. I just wanted to go out there and play well,” Hewitt said after his singles win over Sock.

“I didn’t quite tear up. But I was pretty pumped up. I felt good. I felt excited.

“This is why you play the game – to go out and perform on big stages. I love playing for my country, and this is one of those weeks.”

Hewitt has slid to 307th in the world rankings after focusing his attention on managing his body through the twilight of his career.

But the two-time major champion was still far too good for world No.26 Sock, with the American lacking the competitive grunt of Hewitt.

“I said I was going to be better from that first match,” Hewitt said.

“I felt like the second and third sets (of that first match) I was starting to get the feel of the tempo of playing against these big guys again.

“The first two matches I’ve played pretty big servers – one lefty, one righty. I felt like for the most part I handled it pretty well (against Sock).

“I felt like I had to try to keep enough balls in, but I couldn’t go too defensive and let him dictate. I felt like I stepped it up from two nights ago.”

Hewitt and Wolfe later combined to beat Sock and Duval 7-6(4) 6-1 in the mixed doubles.