Serena Williams' continuing knee troubles have given Australia Gold - represented by Jarmila Wolfe and Lleyton Hewitt - a 1-0 lead over the USA at the Hopman Cup. 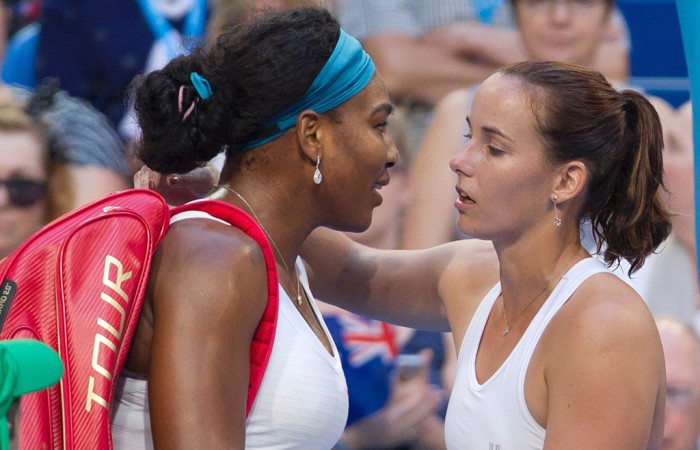 Williams was forced to retire from her Hopman Cup clash with Jarmila Wolfe on Tuesday night because of inflammation in her left knee.

The 21-time Grand Slam winner was trailing 7-5 2-1 when she called it quits, with her movement on court clearly hampered by the knee injury.

Williams also withdraw from Monday’s 2-1 tie loss to Ukraine, fuelling speculation she will be underdone for this month’s Australian Open title defence.

But the 34-year-old remains confident she will bounce back to full fitness soon, saying a few days’ rest and some rehab is all she needs.

“I just have some inflammation that’s been going away very slowly,” Williams said on Tuesday night.

“It’s going away, but just needs a little more time.

“I was afraid to move, and I need to get in that space where I am not afraid and then I will be able to move better.

“I’ve been training really hard during the off-season. Really pushing myself beyond the limits. I just think a day off or two will make a world of difference.”

Williams hasn’t ruled out the possibility of fronting up for America’s final Hopman Cup tie against the Czech Republic on Thursday night.

However, that scenario appears extremely unlikely.

Instead, Williams is set to turn her attention towards finding a way to nurse her body through the Australian Open.

Williams put on a brave face when quizzed about her future prospects.

After all, it was only last November when her coach Patrick Mouratoglou revealed Williams’ knee problem was similar to the one that has hampered Rafael Nadal in recent years.

“I only think positive and I know I’ll be okay,” Williams said.

“It’s not even a bump – just a minor thing in the road and I’m gonna fly over it.”

Meanwhile, Wolfe was happy with her form in her second singles match of the year. The world No.105 unleashed some nice winners before Williams called it quits in the second set.

“She’s going to be a force for a long time. Just because she has a bad knee now, it doesn’t mean anything,” Wolfe said.