Moerani Bouzige toughed out a three-set thriller over Mayez Elrich while Violet Apisah stormed to victory to claim her first national title. 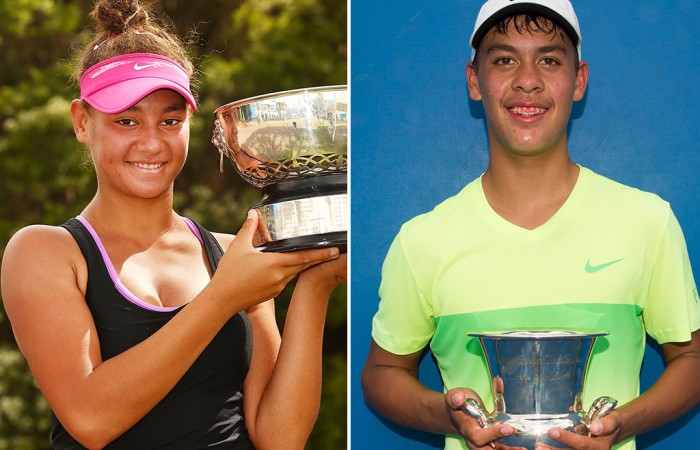 Moerani Bouzige kept his cool on another sweltering morning at Melbourne Park to see off Mayez Elrich 7-5 3-6 7-5 in the 16/u Australian Championships final.

The No.3 seed, who ended the run of surprise semifinalist Nathanael Consalvo, survived a spirited fightback from No.7 seed Elrich, who had recovered from a set down in both the quarterfinals and semis.

But Queenslander Bouzige dug deep to win the title in two hours, 45 minutes.

“I’ve always wanted to win this tournament,” Bouzige said. “It was a battle, and really hot today.

“I focused really hard, didn’t chatter. I was getting a bit down on myself at some points, and I tried to just knuckle down and get the job done.”

Violet Apisah’s decision to accept a wildcard into the 16/u draws paid off in some style as the 15-year-old won both the singles and doubles titles.

Apisah, twice a beaten finalist in the 14/u division, followed up yesterday’s comeback three-set win over top seed Michaela Haet with a 6-1 6-4 victory over No.5 seed Alexandra Bozovic.

“It was really hot, but it was better than yesterday,” said Apisah, the No.7 seed. “It feels really good. The last two years I’ve played under-14s and I’ve always come runner-up, so I really wanted to get this one. I’m really happy.”

Both Bouzige and Apisah have earned themselves wildcards into the Traralgon Junior International and the Australian Open junior draws.

“Hopefully I can do well there,” added Apisah, who later claimed the doubles title alongside Jeanette Lin with a 1-6 6-2 [10-6] win over Petra Hule and Selena Turulja.