Straight sets victories on Thursday at Melbourne Park have seen Ken Cavrak and Amber Marshall crowned the 14/u Australian champions. 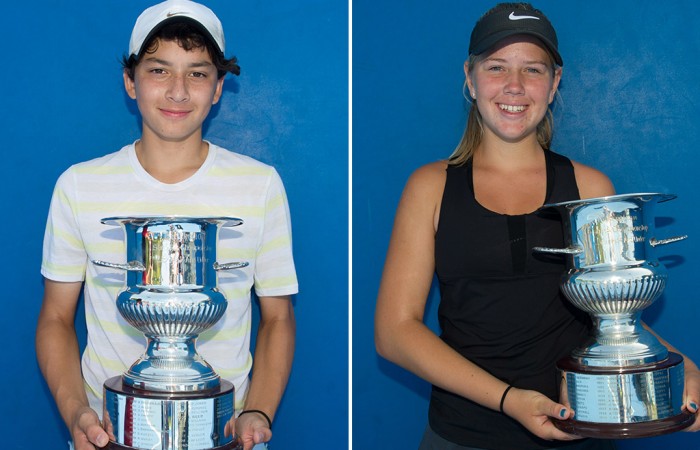 Ken Cavrak and Amber Marshall are this year’s 14/u Australian champions after winning their boys’ and girls’ finals in straight sets on Thursday at Melbourne Park.

Cavrak overcame top seed Tristan Schoolkate 6-4 6-2 in a brilliant display from the baseline, highlighted by a picturesque one-handed backhand.

The No.3 seed closed out victory in style, bringing up three match points with a crisp backhand winner down the line and converting on his first opportunity with an inside-out forehand winner.

“I played a good match,” Cavrak said after beating his doubles partner.

“I think I stayed on top of the points well. I made more balls and forced him to make a couple of errors.”

Earlier in the girls’ final, Marshall fought off the impressive challenge of Annerly Poulos, last year’s 12/u national champion.

Marshall claimed a tight first set and recovered from 1-4 down in the second set to move ahead 5-4.

Although broken to love when serving for the title in the 10th game, she got another chance in the 12th game; despite falling behind 15-40, she found the range on her heavy groundstrokes and sealed a 7-6(5) 7-5 win.

“I’ve never had this feeling before because I’ve lost the last two years in Nationals in the semifinals so this is the first one I’ve won,” said the No.1 seed, who went through the draw without dropping a set.

“I played pretty good throughout the whole tournament, but I think against Annerly I played my best.

“(The key was) moving the ball around the court and not giving up.”